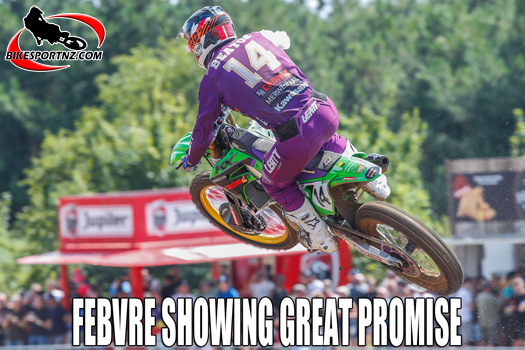 Frenchman Romain Febvre, of the Kawasaki Racing Team MXGP, dug deep as he defied a week of sickness to narrowly miss the podium in the Belgian round of the FIM World MXGP Motocross Champs at Lommel.

The Belgian Grand Prix is always the most demanding race of the season through the unrelenting deep sand of Lommel and this year was also run in stifling heat with temperatures soaring way above 30 degrees to render the race a battle not only of skill and speed but also of survival, even for the best-prepared athletes in the world.

Febvre, still on the comeback from injury, had still been suffering until midweek from the effects of sickness which had caused his withdrawal from the previous weekend’s Czech GP but battled bravely for victory with the three fastest sand-specialists in the world all day as many other top names wilted in the demanding conditions.

As in qualifying, he chose a central start-gate which, despite the additional distance involved, would offer a more flowing line through turn one and the tactic again paid off as he emerged top-five in both motos.

He was quickly making dramatic moves up the leader-board to take over second place on the sixth of 16 laps in race one and continued to close down to within three seconds of the leader before, unable to train all week, the strain on his energy reserves started to show at the 20-minute stage of the race and he surrendered one position three laps from the end to finish third.

Just two hours later he returned to the rugged track to again take over second-place after five laps and held the position until four laps from the finish.

A startling move by the eventual GP winner with two laps remaining eventually relegated him to fourth in moto and overall but the bravery of his performance, so narrowly missing the podium, was universally acclaimed.

“It’s always frustrating to miss the podium by just a few points, but that’s how it is,” said Febvre.

“We knew that this GP would be a tough one – maybe the most difficult of the season – and as they didn’t flatten the track on Saturday evening we knew that it would be exceptionally tough today, particularly as it was also really hot.

“I had a good feeling all weekend and I showed I had a good speed with one of the fastest lap-times in both races.

“Physically I’m still not back to my normal level and I have only been back on the bike for six weeks so I couldn’t expect too much as my rivals are racing their fourteenth GP of the season; if I was at full fitness I would for sure have been on the podium as I finished fourth anyway.

“In both races I was OK for twenty minutes until I started to feel tired but that was to be expected as I was really sick last weekend. I will rest for a few days and then will be back on the bike to prepare for the last four GPs; I like all of these tracks and I hope to finally record some podiums again before the end of the season.”

A mistake on lap four of the first race cost Beaton 10 seconds and five positions but he regrouped quickly to confirm that he is gradually regaining his fitness, posting solid lap times to the close to pull back that lost ground and take the chequered flag 17th.

He held a smooth eleventh place for six laps of race two until the track and climatic conditions started to take its toll and he eventually crossed the finishing-line 15th.