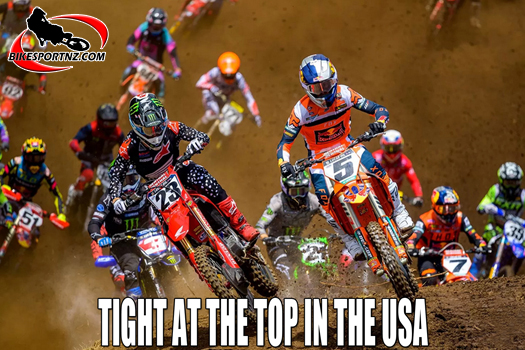 Although Yamaha’s Eli Tomac leads the 450cc championship points in the United States, a 2-1 score-card from Honda’s Chase Sexton at the weekend has kept the national title chase very much alive.

Just five points separate Tomac from Sexton at the top of the 450cc class standings with just four more rounds to go.

With the series now three-quarters done, the riders now head into a two-weekend break, with the Unadilla, New York, round next up on August 13, and that’s where things may really be expected to heat up.

For the third time this season, Team Honda HRC topped both classes at an AMA Pro Motocross National, this time in front of a large Pacific Northwest crowd at Washougal MX Park, the eighth round of 12 this season, with Sexton and young Australian Jett Lawrence doing the honours in the 450cc and 250cc classes respectively.

This event also saw Germany’s Ken Roczen and Jett’s brother Hunter Lawrence turn in solid performances, the former fighting off a fever to notch fourth overall in the 450 class, and the latter winning a 250 moto and taking third overall.

The first 450 moto saw Sexton start second and quickly move into the lead.

He was overtaken by title rival Tomac on lap six, but he kept it close throughout the race—so close that when Tomac dropped his bike with three minutes plus two laps remaining, Sexton ran into him and went down as well.

Both were delayed in remounting, with no change in positions, and Sexton finished just over a second back. Meanwhile, Roczen climbed from fifth on lap 1 to third two laps later, and he ultimately finished fourth.

Moto two was a statement ride from Sexton, who grabbed a huge holeshot and led all 16 laps, withstanding 35 minutes of withering attacks from Tomac to win by over eight seconds. Roczen completed lap one in eighth and advanced to fourth before his health issues contributed to him slipping to sixth.

Hunter and Jett ran second and third in the early going of 250 moto one, with Hunter moving into the lead on lap five and Jett advancing to second eight laps later.

From there, the brothers rode to the finish, with Hunter enjoying an advantage of just over four seconds at the end.

Hunter was second off the start of moto two, with Jett back in sixth, and they were third and fourth after one lap. Hunter dropped his bike on lap seven, letting Jett by for third, and the defending champ was up to second two laps later. In the end, Jett’s steady 2-2 moto scores were good enough for the win, while Hunter’s 1-4 gave him third overall.

“That was gnarly! I felt really good from the get-go,” said Sexton afterwards.

“I didn’t qualify the fastest, but my feeling on the bike was good, which is all that matters. Then it was just an hour and 10 minutes of battling.

“The first moto was a battle, and we had a little scuffle: he fell down, and I ran right into the back of him. The second moto was mentally challenging, with him behind me and not making any mistakes.

“I’m stoked that I was able to persevere and just keep him behind me. That’s how I want to win. You don’t want to win by a guy getting a bad start; it’s obviously easier, but you want to win when the guy is on you.

“Today we stuck together both motos. That was cool for me, and something that I’ve been dreaming of.

“I’ve been wanting to have that battle at the end of races, and it’s come together to where I could push and have a little bit of a gap. These next races are good for me, so hopefully we can have a good finish.”