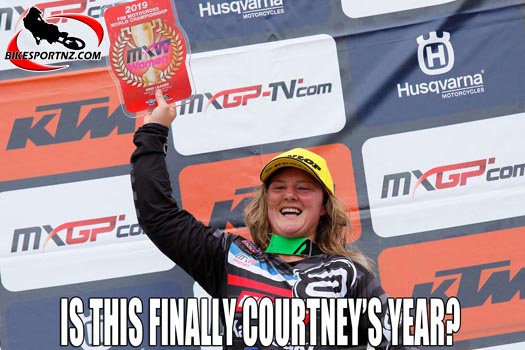 Can 2019 finally be the breakthrough year for New Zealand’s Courtney Duncan?

After three consecutive seasons of narrowly missing out, this year’s world championship campaign may finally bear fruit for the 23-year-old international motocross star from Otago.

She took two more giant strides towards winning the 2019 Women’s Motocross World Championships (WMX), dominating in the Czech Republic at the weekend, the third round of five in the series.

Duncan flew in from her hometown of Palmerston, near Dunedin, to blitz the qualifying session at the Czech Grand Prix at Loket, registering a time two seconds quicker than the next best WMX rider at the high-profile event.

She then scored back-to-back wins on the hard-packed track, giving her an impressive tally of five race wins from six starts in the series thus far.

Racing this year for the first time for the British-based Bike It DRT Kawasaki Racing Team, the flying Kiwi is now 14 points in front of her Dutch arch rival Nancy Van De Ven (Yamaha) with just two rounds (four races, two at each event) remaining – at Imola, in Italy, on August 17-18 and at Afyon, in Turkey, on September 7-8.

Duncan crossed the finish line a massive 36 seconds ahead of Van De Ven in race one in the Czech Republic and then repeated the dose, winning race two by the exact same 36-second margin, on this occasion crossing the line ahead of German rider Larissa Papenmeier (Yamaha). 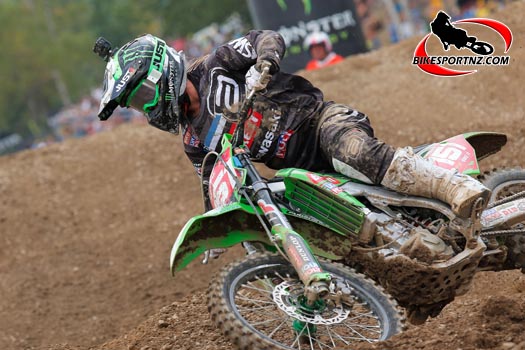 “It was a great weekend,” Duncan exclaimed. “Honestly, I couldn’t really have asked for much more, I started on a good note by qualifying first, then went 1-1 in the championship races.

“It was a tough event. The track was really technical and it was hot out there; I guess we could all feel it at the end of the race. I even fell off on the sighting lap, but it taught me to ride smart. Honestly I felt super slow, but I won both races by 36 seconds, so it showed what a difficult track it was for everyone.

“I put another good stint in at home over the last month so it’s nice to see everything paying off,” Duncan told BikesportNZ.com.

“I’m just so happy for myself and the whole team both here in Europe with (Kawasaki team owner) Steve Dixon and back home in New Zealand; everyone has been working so hard to achieve this success.

“It was pretty much a perfect weekend as I even set fastest lap in practice, which is something I rarely do. I got two good starts and could immediately make good passes to lead every lap. This track is pretty tricky but I could stay concentrated and managed a good lead to the finish of each race.

“I’ve also got a good lead in the championship now so I just need to keep focused and bring it home.

“It was really nice to race with the 2020 bike this weekend; I tested it a couple of weeks ago and, after just 10 minutes, I knew it would be the bike I’d love racing with here. I’m very happy with the refinements Kawasaki have made. It’s a new engine so the power is a lot different, but it’s just so good and I could really feel the difference from my old bike.” 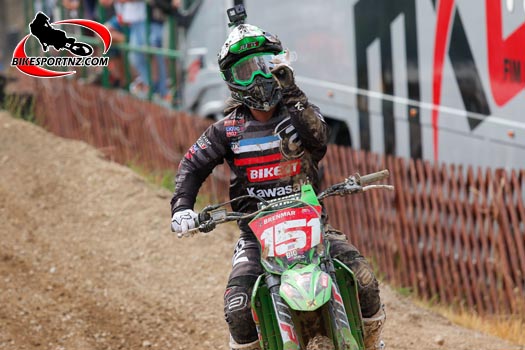 This season is Duncan’s first on the Kawasaki bike and she is well on target now towards emulating the Women’s World Cup successes achieved by fellow Kiwi Katherine Prumm when the Pukekohe girl took her Kawasaki KX250F to finish top in the world in 2006 and again in 2007.

Duncan should probably have already won the women’s world title, having come desperately close over the preceding three years, but luck abandoned her each time.

Twice she was denied the world title through injury and then lost the title by just two points on the other occasion.

More determined than ever to finally achieve her goal, Duncan this year made the decision to join the highly-experienced British Kawasaki squad run by Steve Dixon.

“They’ve given me an awesome opportunity and I’m very motivated to put them on top in 2019. A fresh start was what I needed and I couldn’t be more excited than to do that with Kawasaki. Kawasaki New Zealand have also come on board to support me at home, for which I am also very thankful.”