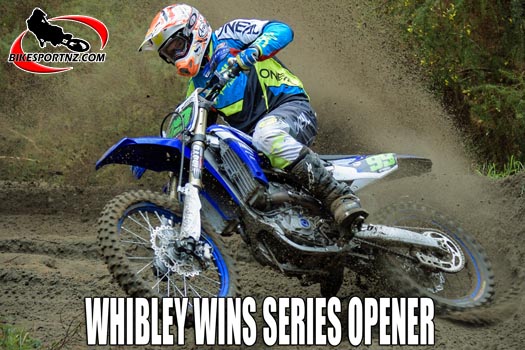 The New Zealand Grand National Cross-country Championships are off to a roaring start and the series creator could not be happier.

Taikorea’s Paul Whibley (Yamaha YZ450F) was comfortable winner of the first round of five in this year’s NZGNCC Series in the Woodhill Forest on Sunday, crossing the finish line eight minutes ahead of the next best rider, Whanganui’s Seth Reardon (Yamaha YZ250FX), making it a Yamaha 1-2 finish, while Tokoroa’s Jake Wightman (KTM 250XC-F) claimed the third podium spot.

The NZGNCC Series – not to be confused with the GNCC Series in the United States or with the separate New Zealand Cross-country Championships held earlier this year – is actually a rebranding of the popular NZXC Series that Whibley himself created when he retired from fulltime international racing and settled back at his Manawatu base at the end of 2014.

The now 41-year-old Whibley became New Zealand Cross-country Champion at his first attempt in 2015, but he has had plenty more on his hands in more recent years as he puts back into the sport he loves, running coaching clinics and, of course, overseeing his new series.

The NZGNCC series “cherry picks” from other established competitions, taking the best of the bunch to compile its own five-round series and Sunday’s race was also round two of the Woodhill Two-Man series, with only the “ironman” (solo) riders eligible for NZGNCC points.

Whibley (Yamaha YZ450F) found himself on the third row of the starting grid at Woodhill on Sunday, but he quickly moved away from this bunch and caught the riders who’d been in the starting rows ahead of him.

“I was passing plenty of riders, but I never really knew if I was leading at any stage or not, because other riders near me on the track might have been solo riders or part of two-man teams and it was only the solo riders I needed to worry about,” he explained.

He should not have been concerned because, when the chequered flag flew at the end of the three hours, he was outright winner, with other solo riders Reardon and Wightman the next best, while fourth overall was Rotorua’s two-rider combo of Barry Morris and Cam Negus (Yamaha YZ250F), the first of the two-man teams.

“I did not push too hard all day,” said Whibley. “I wanted to concentrate on riding smooth. There was a lot of second-gear riding and tough to find a rhythm.

“I was surprised I held on as well as I did because my fitness is not at its peak. I plan on doing a bit more riding between now and round two.”

With a dozen years of sleeping in motor homes and travelling the world to race off-road motorcycles, competing in the Enduro World Championships and the Grand National Cross-country Championships (GNCC) in the United States – where he twice won the title outright, in 2009 and 2012 – the former forestry worker the bike world affectionately calls “The Axeman” was ready to settle down … or was he?

He created the NZGNCC (NZXC) Series to “provide a competition that would inspire and prepare young Kiwi racers for the kind of racing they might encounter overseas”.

Although it was never his intention, he won the inaugural 2015 series outright, and he scaled back his own on-track participation in the years that followed, with fresh champions allowed to emerge – Coatesville’s Sam Greenslade won the series in 2016; Whibley returned to win it again in 2017 and Titirangi’s Callan May won it last year.

“I probably won’t be contesting every round myself this year,” Whibley confirmed. “I’ll be too busy organising things, especially round three in September, which is in my own backyard at Taikorea (just outside Palmerston North).”