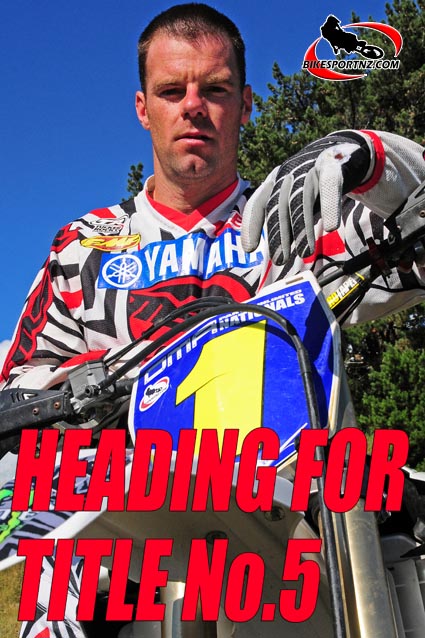 New Zealand’s Paul Whibley is rocketing towards a record fifth consecutive title win in the high-profile Off-Road Motorcycle and ATV (OMA) series in the United States.

The Yamaha ace from Pahiatua won round four of this season’s championship in Michigan at the weekend, further stretching his lead at the top of the points standings and ensuring he is well on course to keep the crown he has held every year since he first won it in 2008.

“With very dry and dusty conditions, a good start was going to be super important at this fourth round of the OMA series,” said the 33-year-old Whibley (Yamaha YZ450F).

“I took another good start and snatch the hole shot from Russell Bobbitt, who also knew the importance of getting out front early. The fast grassy field off the start was the best place to make a pass before we ducked into the woods and I made sure I held my lead until then.

“Once inside the woods, the trail tightened up a lot and defending the lead became a lot easier,” said the BikesportNZ.com and Monster Energy-supported rider.

“I felt good on the bike and was riding pretty comfortable and by the five mile marker I had about 25 seconds on Russell. Nearing the end of the lap there was a super tight section, first gear, handlebars on lock to lock. The YZ450F was a handful in there and I was concerned that both Russell and Nick Fahringer (who was running third) would close up fast on their more nimble two strokes. My worries disappeared when I completed the lap and found I had increased my lead.

“I continued to keep the heat on and wanted to get a nice buffer before I hit lapped traffic and was slowed by their dust. Although, with a fairly long lap, any traffic was pretty spread out and I managed to weave my way through without too much of a hold up.

“(My wife) Katherine and (mechanic) Ryan (Slagle) handled the pit stop and I was able to push my lead out further during the closing laps of the race. Nick Fahringer was able to move past Russell Bobbitt in the latter part of the race and set the finishing order.”