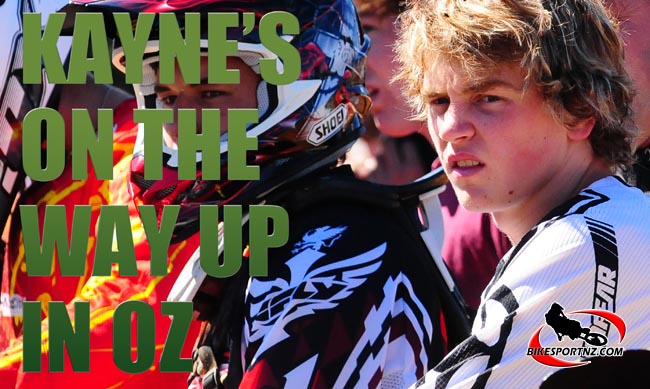 New Zealand’s Kayne Lamont is on the charge across the Tasman.

Racing for the New Zealand-based CMR Red Bull KTM Team, the Mangakino rider made another huge leap up the championship rankings with another overall win in Australia at the weekend.

He raced his KTM 250SX two-stroke bike to the top step of the podium at the third round of nine in the Motocross Development Under-19 class at Wonthaggi, Victoria, three weeks ago, lifting him to fourth place in the series standings.

But then he repeated the dose at round four in Murray Bridge, South Australia, on Sunday and he now finds himself second in the championships, just nine points behind the leader, Australian KTM rider Dylan Long.

Lamont’s outright win at Murray Bridge on Sunday meant he became the first two-time winner of the 2012 season in this class.

The Shift, Dragon and BikesportNZ.com-backed KTM rider was sixth in the first moto, but he bounced back to win moto two and finish second in the final moto to clinch the overall for the day.

Sunday’s MXD class podium was completed by Dylan Leary, making it a clean-sweep of the podium for KTM.

Lamont raced a KTM SX 250 two-stroke for the first time at Wonthaggi, having only collected the bike earlier that week, but the 18-year-old adapted quickly and his consistent 2-1-7 results kept him well in contention for the Australian national title.

His 6-1-2 results at Murray Bridge at the weekend gave his campaign another massive and very welcome boost.

“I’m really enjoying the new power of the two-stroke and it seems to get good starts,” Lamont said.

“The track was pretty slippery at the weekend, hard underneath but slushy on top. I crashed a couple of time and one get-off included a ‘superman’ impression, but luckily I didn’t hurt myself.

“To be totally honest, I do expect to be one of the top guys in this class. I am 18 years old and one of the more senior riders in the class, but it has been hard because I don’t know any of the tracks over here except for when we get to the final round, which I last raced at in about 2007.

“I also want to thank Cannon Smith from the CMR Red Bull KTM Team and Jeff Leisk in Australia for all that they have done for me,” said Lamont.

The Australian Motocross Championship will now have a mid-season break, but returns for round six at Hervey Bay in Queensland in Sunday, July 1.