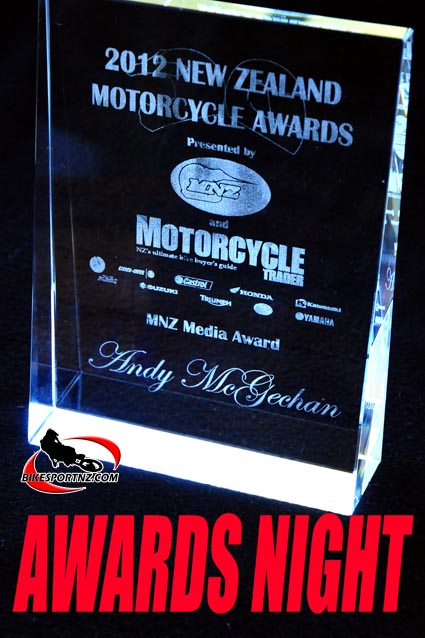 BikesportNZ.com’s Andy McGechan was honoured at a special awards ceremony in Queenstown on Friday night.

The well-travelled Taranaki-based photographer and journalist was awarded the Motorcycling New Zealand media prize for services to motorcycling.

The father-of-three has worked in various media roles – reporter, photographer, sub-editor and editor – at several newspapers around New Zealand in a journalism career spanning more than 30 years.

In addition, he is a published author – his biography of Kiwi motocross GP star Josh Coppins (Josh – Flying Kiwi) hitting the bookshops in 2008.

He is a columnist and regular contributor to Kiwi Rider magazine. His work features each week in hundreds of newspapers all around the country, including the New Zealand Herald, the Manawatu Evening Standard, the Truth Weekender, the Nelson Evening Mail and the Christchurch Press, to name a few.

He has been BikesportNZ.com’s man on the spot at Grand Prix events in Australia, England, Ireland, the United States, the Netherlands, Belgium, France, Italy and South Africa and his work has also been widely published in magazines overseas.

In 2003, McGechan was voted Best Magazine Feature Writer in the national Qantas Media Awards, winning the award for his article about Taranaki road-racer Sean Harris’ exploits at the notorious Isle of Man races.