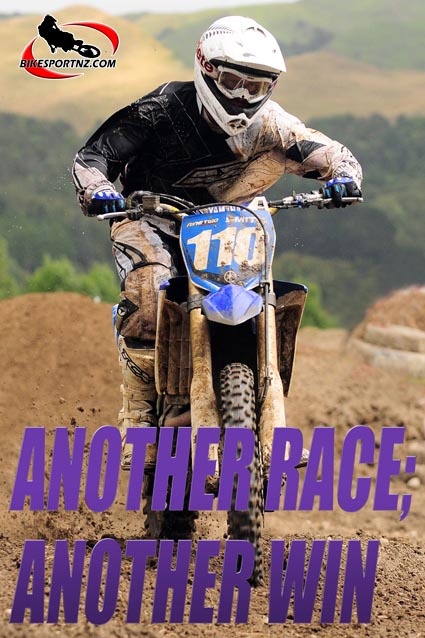 It seems Taranaki’s Adrian Smith can do no wrong at the moment.

The 27-year-old Yamaha ace ticked off another box on his “things to do” list when he won round two of the popular Dirt Guide Cross-country Championships at The Pylons, near Atiamuri, on Saturday.

His success at the weekend comes fresh in the wheel tracks of other major wins recently, including his wrapping up the New Zealand Cross-country Championships at Cheviot a week earlier.

Smith has also been in winning form in the Yamaha New Zealand Enduro Championships. He leads that series outright with just the fifth and final round remaining, set for Taupo on July 21.

His win at the second round of the Dirt Guide series on Saturday was particularly impressive, the farmer from Mokau so far in front of the chasing field that he was forced to complete an extra lap.

Smith arrived at the timing zone at the end of his fourth lap with a minute and a half left still on the two-hour race clock, forcing him to do one more lap than anyone else.

The second-placed rider, Aucklander Mike Skinner (KTM 300EXC), avoided having to follow Smith onto a fifth lap by just one second and the next two riders, Auckland Callan May (Yamaha YZ125) and Te Awamutu’s Kevin Archer (KTM 530EXC), were only a further 21 seconds back.

“I grabbed the holeshot at the start and just rode steadily away,” said Smith, who had been on the injured list and a spectator only at the first round of the series last month.

“I sat out the series opener because I wanted to heal properly and be fit and ready to go in the cross-country nationals, but I’m 100% again now.

“The course on Saturday was quite rough and challenging in places but it flowed very well and that’s the sort of course I like, weaving through the trees.

“Callan did really well,” said Smith. “With a smaller bike tank, he had to make one more fuel stop that the rest of us and that would have cost him a bit of time.”

This will make the final round very interesting with Skinner having two overall runner-up finishes and Power with a 1st and 5th, so the points are very close.

After the junior race, Sowry’s father approached organiser Sean Clarke to ask if the teenager could ride in the senior race as well. He was given the thumbs-up.

The venue for the third and final round now will be Pylons and not at Whakamaru, as has been previously advertised.

“There is just too much logging at that part of the forest and with me going to Romania for the Redbull Romaniacs, a venue switch was the best option,” said Clarke.