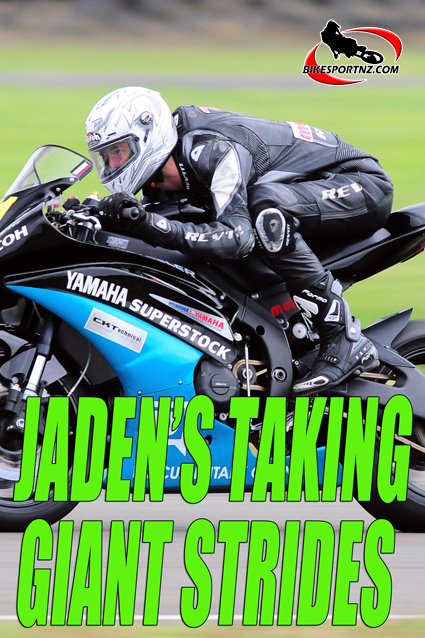 Auckland’s Jaden Hassan may be only 16 years old, but he already has a wealth of experience when it comes to racing motorcycles.

This year he has stepped up to the 600 sports production class and, after just a handful of meetings on a stock standard Yamaha YZF R6 machine, he’s already starting to make an impact.

He learned his craft racing the tiny Yamaha TZ125 in the 125GP class but the tall teenager had simply outgrown that competition in more ways than one.

With a lanky 191cm (6’ 3”) frame, Hassan had to contort his body into impossible angles just to crouch on the small bike, but now he’s moved up to a 600cc Yamaha R6 and he’s really able to stretch his legs on the race track.

“We still had to have the foot pegs pulled back a bit and I’ve set the handlebars quite flat but, to tell the truth, my height actually helps when I’m racing the bigger bike … I’ve got more leverage. I’m still pretty skinny, so there’s no weight to slow the bike down,” said the youngster from Westmere.

He is currently running third overall after the second of three rounds in the Suzuki International Tri Series at the weekend, behind experienced 600cc campaigners Glen Skachill (Suzuki), of Wellington, and Dennis Charlett (Suzuki), of Christchurch.

Unfortunately he won’t be racing the third and final round of the Tri Series on the streets of Wanganui on Boxing Day but he has high hopes that he will again be on the podium when the New Zealand Superbike Championships kick off at Levels Raceway, near Timaru, on January 30.

“I’ve just been doing these first two rounds of the Tri Series to test out what the competition is going to be like. I was hoping for a top-five result but to be among the top three is not what I expected.

“It’s thanks to Yamaha and my sponsors Ricoh, Documentary Channel and Metzeler tyres that I’m able to race at all. They have been great for me.”