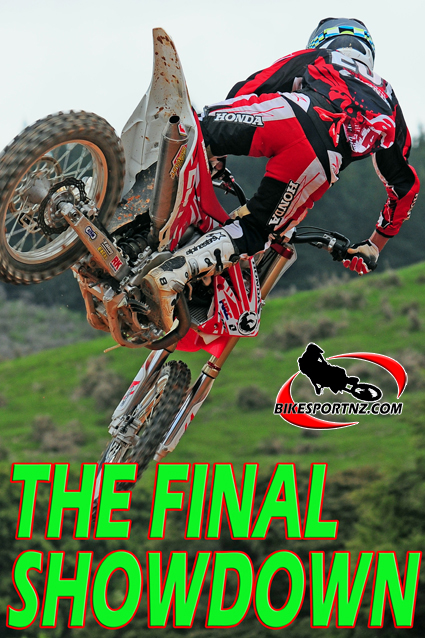 Just as happened last season, the battle for national motocross honours will once again be decided in Taranaki, the home of New Zealand’s first motocross world champion – Shayne King.

And, what’s more, it’s 1996 500cc world champion King who will be central to the action at Taranaki’s fourth and final round of the Demon Energy-sponsored series this weekend.

The New Plymouth man is now retired from racing but he’s still very active in the sport, acting as manager to the Honda racing team … and it’s possible that two of his racers could be crowned national champions when the series winds up at the treacherous Barrett Road circuit on Sunday.

Cooper comfortably won all three MX1 races at round three at Patetonga, near Morrinsville, last weekend but the consistent McDonald (pictured above) has not finished below third place all season and — with just 11 points to separate these two men — it will therefore be a close affair at the final round in Taranaki this weekend.

In the MX2 (250cc) class, the battle is tense between Kiwi internationals Michael Phillips (Honda), of Rotorua, and Queenstown’s Scott Columb (Suzuki).

The pair were level-pegging at the start of the day at Patetonga, but Phillips emerged at the end of the day with a slender four-point lead.

That lead will come under fire in Taranaki with Columb determined to overturn the deficit at a track he describes as “one of my favourites”.

The 33-year-old King is formerly from Taranaki and he grew up racing on the Barrett Road circuit before heading to Europe to race the GPs.

“I can afford to cruise on Sunday … but I won’t. I really want to put on a good show for my family and friends from Taranaki,” he said.

However, Martens leads the race-within-a-race for under-21 age-group honours, ahead of Mangakino’s Kayne Lamont (Yamaha) and Wanganui’s Tom Managh (Suzuki) and he is expected to wrap up that title on Sunday.