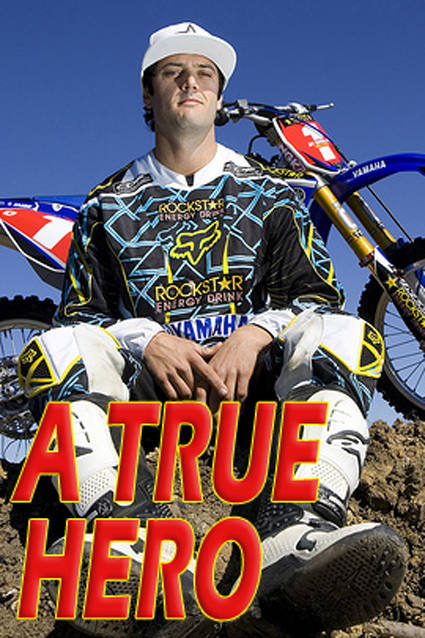 After one of the most difficult weeks of his life, Yamaha rider Jay Marmont has claimed victory at the fourth round of the Monster Energy Super X Series in Canberra on Saturday night.

With his daughter, Lila passing away just days earlier, Marmont was inspirational, showing true professionalism and extraordinary strength in winning the event.

In the Pro Lites, Kyle Cunningham bounced back from a fall in the opening race  to win his first race since joining Serco Yamaha for the Australian supercross  season.

The fifth round of the 2009 Monster Energy Super X series will take place at Parramatta Stadium on Saturday November 14, 2009.

Marmont, who took the holeshot in each race and finished each of the night’s three motos second, third and first, dedicated his victory to his daughter, Lila who passed away on Thursday.

The night was going to plan for the defending champion, who had piloted his KX450F to two of the three moto wins as part of the Open class Triple Challenge.

Reed was winded and unable to continue in the final 10-lap moto and plummeted down the points standings as a result.

“It was a tough night, we had some good speed but the bike had a few issues early on,” explained Reed. “I knew I would need to start well and was up the front for the first two motos where I was able to move through to the lead.

“It all went wrong on the first lap of the final moto and I went down very hard, I was hurting and there was no way to continue.

“It’s a big blow in terms of the championship, I’ll have to fight these guys every inch of the way to reel them back in with only three rounds left.”

CDR Rockstar Yamaha Team boss Craig Dack said that after placing no pressure on Marmont to compete, the victory is one which he will remember forever.

“On behalf of the CDR Rockstar Yamaha team and Yamaha Motor Australia, tonight we salute Jay Marmont — a true champion and an incredible person along with his wife Abby who is an unsung hero after everything they have been  through over the last six months,” Dack said.

“To achieve what he [Jay Marmont] did tonight, will hold a place in our hearts forever.”

While the crowd rode each lap of the race with Marmont it was a challenging night on track for his team-mate, Cheyne Boyd who fell during the first race and had his brake torn off.  He recovered from the DNF and claimed 19th in the second race before finishing second to Marmont in the final race.

Serco Yamaha’s Kyle Cunningham has recorded his first ever Monster Energy Super X race victory with the young American the first to the finish line in the night’s second race of the Triple Challenge at Canberra Stadium, with the overall being won by Suzuki star Matt Moss.

Unfortunately for Cunningham the race victory was not enough to provide him with his fourth consecutive podium finish after the YZ250F rider finished 18th and third in the other two races of the evening.

The result means that Cunningham has slipped two positions in the championship to fourth.

“I got the heat victory then in the first moto, I came out a bit short on the triple and fell and couldn’t get my bike started, so I finished way behind the lead pack  which was pretty disappointing,” Cunningham said.

“I was able to get the holeshot from the outside in the second race and won by four seconds and then in the third moto got caught up and lost a lot of time there and then got sixth overall.”

Cunningham’s team-mate, Kirk Gibbs, finished inside the top three in the opening race before a fall in the second race saw the YZ250F rider finish the race in 16th position.  He was able to recover and claim sixth in the final race and eighth for the round.

“My bike was good tonight, I struggled a bit during practice but we sorted a few of the issues out over the night and I felt quite comfortable,” Gibbs said.

“I fell in the second race and my knee is a bit sore but I will back on the bike during the week and ready for Parramatta next weekend.”

Kiwi fans will be able to enjoy the racing this year. The sixth round of seven is set for Waikato Stadium, in Hamilton, on November 21.