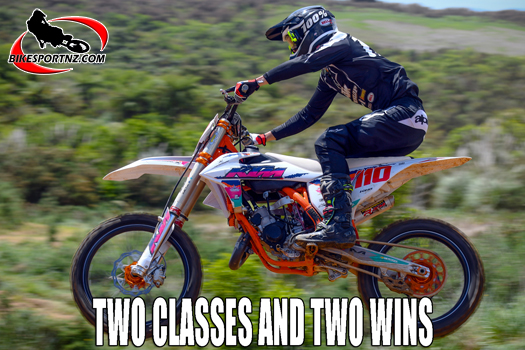 His dad was once a world champion and his big brother is pretty handy on a motocross bike too, but it was Taranaki teenager Rian King who stole the spotlight in racing near Huntly at the weekend.

The 16-year-old, a year 12 pupil at Francis Douglas Memorial College in New Plymouth, was in simply scintillating form at the first of two rounds in this year’s Kawasaki-sponsored Waikato Motocross Championships on Saturday.

He lined up to race in the junior 15-16 years’ 125cc class at the Moto Central track, on the outskirts of Huntly, and he also took his distinctive orange and white KTM SX125 bike into battle in the senior 125cc class.

To cut a long story short, he dominated both classes, finishing with an unbeaten hat-trick of wins in his three junior races and he compiled a 1-2-1 score-card to win the senior 125cc category too.

“The day went really well and I felt good on the track,” said King.

“I wasn’t really surprised I did so well. It was good fun doing two classes and having double the time on the track.”

He gives part of the credit to his father and coach, former KTM factory rider and 1996 500cc motocross world champion Shayne King.

“I have been working on a few things with dad lately and that has helped. I feel like I was still riding similarly to what I did at the junior nationals last month, but without making quite as many mistakes.” 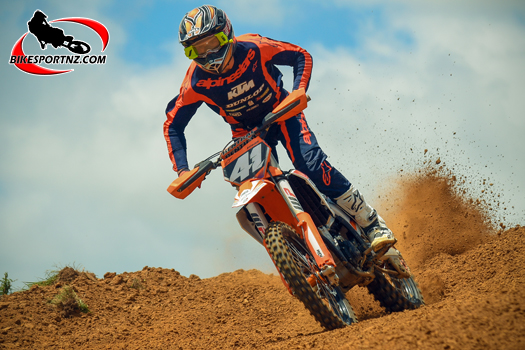 “I had no problems at all on the Huntly track on Saturday. I think the track layout was cool and I really enjoyed it, but it was very dry and slippery.

“Up next for me will be round two of the Waikato Champs (at Te Kuiti on December 3-4) and I’m still undecided if I will ride the MX2 class or 125cc class at the senior nationals (starting with round one at Balclutha, in South Otago, on February 12).”

With whatever this young man decides to do in the future, his rivals will need to be at their best, perhaps including sibling rival Curtis King, his 19-year-old big brother who also performed with credit at the weekend.

Curtis King took his KTM SX-F250 to finish 4-4-7 in his three senior MX2 (250cc) class races at Huntly – fighting back from last to earn seventh in that final race – and this was good enough to wrap up the day fourth overall, behind Tauranga’s Brodie Connolly (Yamaha), Papamoa’s Cody Cooper (Kawasaki) and Cambridge’s Jared Hannon (Kawasaki).