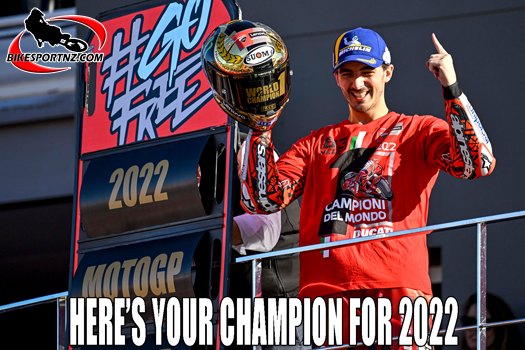 Ducati rider Francesco Bagnaia has secured his first world title in the premier class thanks to a ninth-place finish in the Valencia GP at the weekend.

Racing at the Circuit Ricardo Tormo in Cheste, the Ducati Lenovo Team rider from Italy secured his first MotoGP World Title after making a historic comeback in the championship, which has never been achieved before by any other rider in the premier class.

After finding himself sixth in the standings at the end of the German GP, Bagnaia, or “Pecco” as he’s often referred to, managed to close a gap of 91 points on Yamaha’s Fabio Quartararo over eight Grands Prix and took the lead in the series with 14 points over the Frenchman in the Australian GP, at Phillip Island, with two races to go.

After increasing his lead to 23 thanks to a stunning victory at Sepang in Malaysia, Bagnaia needed only a ninth place at the weekend to secure Ducati’s second Riders’ World Title in the premier class, 15 years after Australian Casey Stoner’s first title for the manufacturer in 2007.

For the 25-year-old Bagnaia, from Turin, and the Bologna-based manufacturer, this is a historic achievement: With seven wins, 10 podiums and five pole positions this year, Bagnaia became the first Italian rider to win the MotoGP World Championship on an Italian bike, the Ducati Desmosedici GP.

The last person to do so in the top class was Giacomo Agostini 50 years ago, in 1972, when he won the title in the 500cc category with the MV Agusta.

The Valencia GP was also Jack Miller’s last race with Ducati. Starting with the third fastest time, the Australian rider had managed to stay in the top positions fighting for the podium, but with four laps to go, he crashed out while he was third.

Miller ends the season in fifth place in the championship thanks to one win and seven podiums, besides a pole position.

“We have to be really happy and proud of the incredible work we did,” said Bagnaia afterwards.

“After Germany, we found ourselves 91 points off the top, but we found the right motivation to come back and win the title in Valencia. Together we showed that we are really strong and can handle even complicated situations.

“Today’s race was also really difficult because after the contact with Fabio, I lost a wing of my bike, and from there on, I struggled a lot, but I am really proud and happy with the result.

“I also want to congratulate Fabio, who has been an incredible opponent throughout the season. To win coming in front of a rider you respect, as I respect Fabio, gives even more value to this title.”

Meanwhile, the final race weekend of the 2022 MotoGP World Championship season ended with emotions running high also for Team Suzuki Ecstar, who bowed out – not only from the season, but also from competing in the championship.

They did it in spectacular style as Spain’s Alex Rins led from start to finish in the Valencia GP, taking a whole-hearted victory. His Suzuki team-mate and fellow Spaniard Joan Mir showed his usual grit and perseverance to take a solid sixth place.

The team have achieved many great things in the relatively short space of just eight years, with the undoubted highlight being the team and Mir becoming World Champions in 2020.