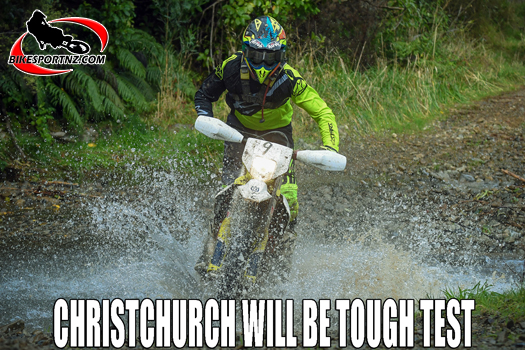 The competition will be red hot at the double-header third round of four in this year’s New Zealand Extreme Off-Road Championship series in the South Island this weekend.

The first half of the Yamaha-sponsored competition has been dominated thus far by Wainuiomata rider Jake Whitaker, but anything can still happen and all the other title contenders will be mindful of that when racing kicks off in Christchurch on Friday.

Hosted by the Christchurch Off-Road Motorcycle Club, this weekend’s two-dayer will begin on Friday with the Enduro X Prologue at the A&P Showgrounds  in Christchurch, while the riders head to Mt Selfe, 1210 Lake Sumner Road, Hawerden, for the Nut Buster hard enduro the following day.

Only three of the four rounds of the championship are to be counted, with riders to discard their one worst score from the three North Island rounds, making this weekend’s two-day contest in Canterbury a hugely significant one in the overall scheme of things.

Motorcycling New Zealand enduro commissioner Justin Stevenson said the series was “proving very popular and there are high numbers of riders entered for this weekend’s event too”.

“Riders nominate themselves as either Gold, Silver or Bronze Grade  competitors, depending upon their skill and fitness levels, and that’s the course they will be assigned to tackle, with the grades each scored separately.”

Bronze Grade riders are expected to be “competent trail riders”. Course difficulty is similar to a regular enduro, but “with some slightly harder sections”.

The competition is marginally tougher for the Silver Grade riders, with a good skill level and fitness required to get them to the finish.

Stevenson said the aim of the Extreme Off Road Championship Series is to provide events that will be designed using the available terrain to be extremely challenging for the riders and an ultimate test for the riders’ ability and skills.

A little video footage from the 2020 Nut Buster Hard Enduro can be seen here: