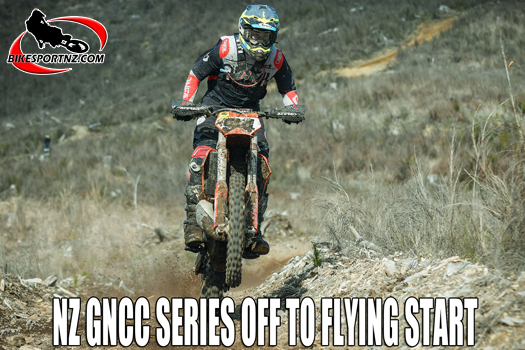 The New Zealand Grand National Cross-country Championship (NZ GNCC) series is off to a roaring start and the series creator could not be happier.

The MotoSR-sponsored NZ GNCC Series kicked into life for 2022 with the first round held at Ohakuri near Tokoroa on August 27.

The NZ GNCC Series – not to be confused with the GNCC Series in the United States – is actually a competition that New Zealand’s two-time former US GNCC series champion Paul Whibley created when he retired from full-time international racing and settled back at his Manawatu base at the end of 2014.

Whibley became New Zealand Cross-country Champion at his first attempt in 2015, but he has had plenty more on his hands in more recent years as he puts back into the sport he loves, running coaching clinics, overseeing his new series and, of course, bringing up his young son Colton, now a rising star in the sport.

The NZ GNCC series “cherry picks” from other established competitions, taking the best of the bunch to compile a separate-but-parallel four-round series and the Ohakuri race was also the third and final round of the Forestland Cross-country Series.

With the International Six Days Enduro being held in France at the end of August and beginning of September, and New Zealand sending an official team for the first time in 16 years, there were a few prominent names missing from the start line at Ohakuri.

But a race is a race and those riders who went into battle certainly earned each and every point on offer.

With the blast of the shotgun the race was on. Bikes roared into life and launched off the start line and into the forestland just south of Tokoroa.

Disappearing  out of sight and only appearing again once they had completed the first 20-kilometre, Wainuiomata’s Jake Whitaker emerged as the early leader.

As a Hard Enduro and trials riding specialist, Whitaker is renowned for his technical skills on the bike, although it’s not always easy to transfer those skills to the faster pace of cross-country racing.

But Whitaker has been working hard and is beginning to really make an impact in the sport.

However, with GNCC racing, a lot can happen in two hours out on the track.

And the hungry pack of riders chasing close behind was not going to let the Wainuiomata man have it too easy.

Whitianga’s Blake Wilkins was only seconds behind Whitaker at the completion of lap one.

As the leaders emerged from their second lap, Whitaker had established a lead and Wilkins had dropped from the leader board.

Another fast starter was Taupo’s multi-time former national cross-country champion Brad Groombridge, who came through with the leaders on lap one but also dropped from the leader board as the race wore on.

Tauranga’s Damon Nield (pictured above) and Auckland’s Ryan Hayward worked their way into podium positions. But when the dust settled and the chequered flag flew, it was Whitaker firing the first shots.

Keeping his composure and riding a flawless race. Putting a stake in the ground and making an early claim that this year is his.

In the 90-minute junior race staged earlier in the day, the top two were separated by mere seconds for the whole race.

Tauranga’s Jack Coleman and Auckland’s Leo Copping went at it for the entire duration. Coleman held a slight advantage but pitted a lap earlier.

Copping tried to capitalise and came in for fuel a lap later. But he slotted back in just behind Coleman the following lap.

When the chequered flag came out, Coleman held a slim seven-second lead and took the win from Copping. Inglewood’s Riley Chesswas filled out the podium in third.

The mini race was led by Taikorea’s Colton Whibley on his tiny Yamaha YZ65 for the first few laps before Whakatane’s Quinn Hawkes and Inglewood’s Cooper Beale powered past on their 85s. These three completed 18 laps in their hour-and-a-half race before Hawkes settled in and took a comfortable win followed by Beale, with Whibley in third.

Round two of the four-round MotoSR GNCC Series takes riders to on Taikorea MX Park, in the Manawatu, on September 17.

NOTE: Paul Whibley was United States GNCC champion in 2009 (on a Kawasaki) and again in 2012 (on a Yamaha). His offspring competition, the NZ GNCC, continues to prove itself one of New Zealand’s most popular off-road competitions.

Rnd 1: August 27, Ohakuri, near Tokoroa (in conjunction with the Forestland XC Series); 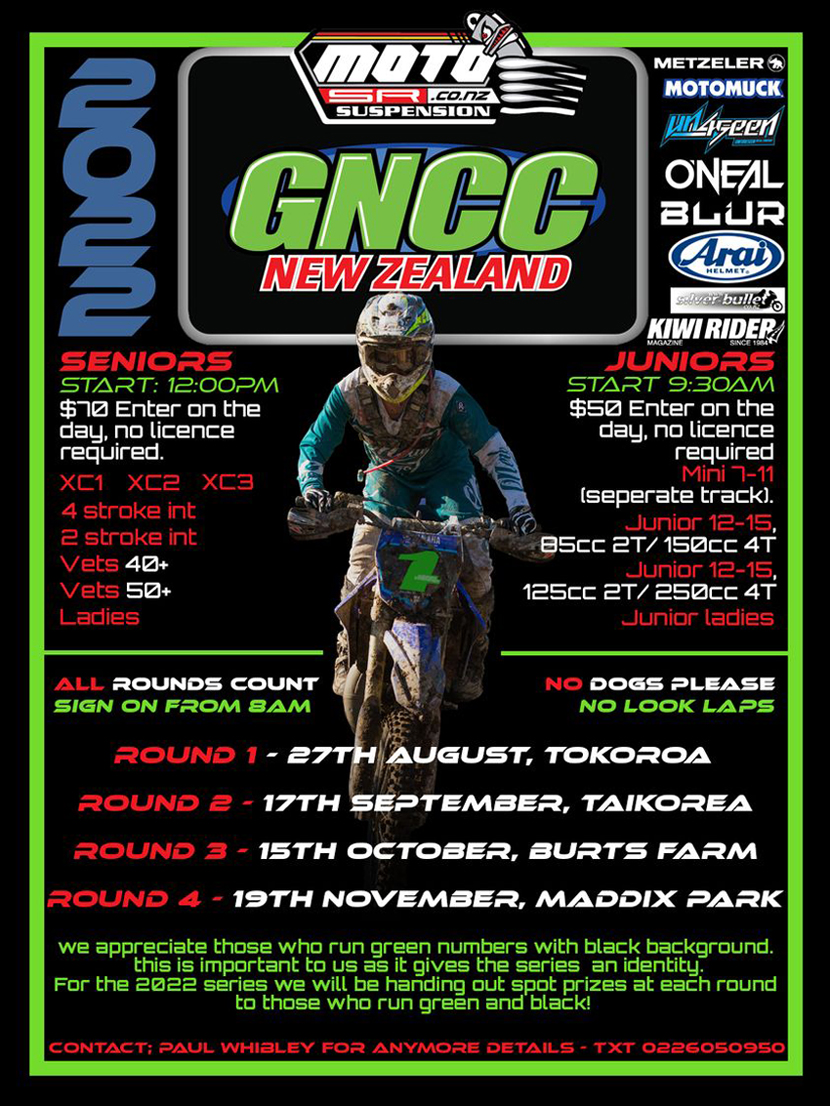