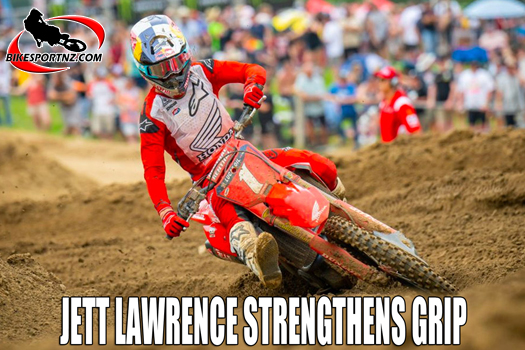 Young Australian Jett Lawrence continued his dominance of the 250 class at round seven of the AMA Pro Motocross Championships at the weekend.

The Honda star notched his second 1-1 performance in a row, this time at Millville, Minnesota’s Spring Creek National.

Lawrence was the stand-out of the field, although brother and team-mate Hunter Lawrence nearly bested him in race one before finishing third overall with 2-5 results.

Jett Lawrence took the first 250 holeshot, then was overtaken by Justin Cooper on lap one.

Cooper fell, delaying Jett long enough for Hunter to take over at the front.

From there, a brotherly battle ensued for the remainder of the moto, the Lawrence sibling rivals establishing a big margin over third place.

Hunter led the majority of the distance, but Jett took advantage of lapped riders to move by his brother two laps from the end and take the win. His advantage was just over half a second, and third place was 35 seconds back.

Following a red flag incident in race two, Jett got a third-place start and was to the front by the second lap.

While Hunter recovered from a poor start, Jett rode to the win with an advantage of just under 8 seconds on second place. Hunter climbed to fifth by the finish, for third overall.

Jett’s overall win was his sixth in seven tries this season, the 11th of his career, and it marked his third sweep of the year. Jett also grew his moto-win total to 16 (nine out of 14 this season).

Next weekend will find the AMA Pro Motocross series hitting the three-quarter mark, with the Washougal National in Washington state.