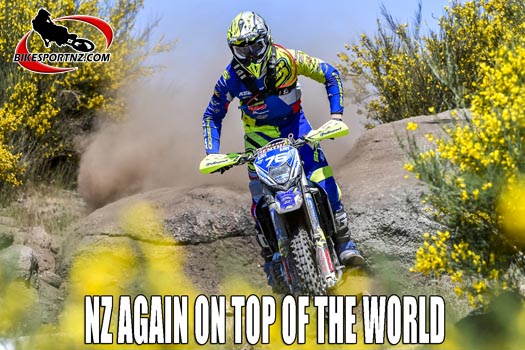 More proof of that was provided last month by Christchurch man Hamish Macdonald when he wrapped up the FIM 125cc Youth Enduro GP World Championships title for 2019.

The 20-year-old from West Melton, near Christchurch, followed in the wheel-tracks of such Kiwi enduro legends as Stefan Merriman, Chris Birch and Paul Whibley when he packed up his helmet a boots and headed off-shore to seek fame and fortune.

While the accumulation of fortune might have to wait a while longer, the winning of fame happened almost immediately for the Canterbury man.

This year was only his second season in Europe, but the teenager from Christchurch had already set tongues wagging on his debut in the youth class of the FIM Enduro GP World Championships last year.

Finishing no worse that sixth all last season and celebrating two wins in Italy, Macdonald wound up a close second overall in the 2018 youth series, finishing behind Chile’s Ruy Barbosa and ahead of Britain’s Daniel Mundell, and this year he was just as impressive.

He took his Sherco SE-R 125 bike to win both days at the double-header 2019 series opener in Germany in March and then repeated the remarkable feat with back-to-back wins at the next double-header weekend, rounds three and four of the series, in Portugal.

Based in Birmingham in England, Macdonald was on the road again to tackle rounds five and six at Santiago de Compostela in Spain, a venue that he was familiar with, having raced there last season and finishing third overall on that occasion.

But his visit to Spain in May this year turned out to be a disaster for him as he crashed and broke his collarbone, threatening to derail what had been, up until that point, an extremely promising campaign.

He bounced back at rounds seven and eight in Italy, although he had to settle for runner-up finish on day one, followed by a DNF on day two, meaning he still had work to do to recover from his Spanish downfall.

The official ‘summer break’ followed and then he was back in action again in the Czech Republic (rounds nine and 10) and then France (for rounds 11 and 12) in September.

He won both days in the Czech Republic and wrapped up his campaign by twice finishing third at the final round in France, giving him an 18-point winning margin over Pavoni, with Spanu claiming third overall, while Frenchman Nathan Bererd (Husqvarna) and then Spain’s Sergio Navarro (Husqvarna) completed the top five for 2019.

The best eight rounds of the 12 were to be counted towards the world title, with riders to discard their four worst results, so that became a blessing for Macdonald who would obviously drop both his Spanish round results and also discard his Italian DNF.

“I cannot find the words … this title (win) is just incredible,” said Macdonald, the first Kiwi to race the world enduro championships since Whibley left Europe in 2005 and Merriman finished up there (with four senior world titles to his credit) at the end of 2008.

“The season was very tricky when I broke my collarbone, and my rivals have pushed. All I can say is thank you to my team and my family, but also to (British enduro legend) Paul Edmondson’s family for welcoming me and taking care of me away from home all year,” said Macdonald.