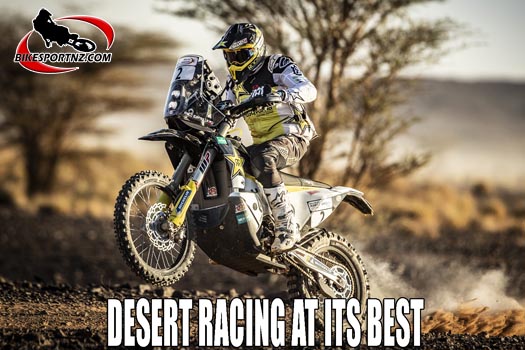 Totalling 456.84 kilometres, stage five of the Rally du Maroc took riders north from their bivouac near Erfoud to the host city of Fes. The route once again challenged all competitors with a mixture of terrain starting with rough, broken pistes before leading to tighter, twisting tracks as the stage neared the finish.

Price was the 15th rider to enter the stage and although the start position would often prove to be an advantage, he would still have to catch and pass several riders ahead in order to make up time. Pushing hard, right from the start, he gained on the leaders with every kilometre.

Unfortunately, a small crash resulted in the reigning Dakar Champion losing too many seconds and despite pushing on for the rest of the stage to ultimately top the day’s standings, he was unable to make up enough time to take the event win. Fourth overall, Price now looks ahead to the 2020 Dakar Rally and the defence of his title.

Toby Price: “It hasn’t been a bad rally for me, I only just missed out on the podium, which is frustrating, but it’s been really good training. I knew I had to push really hard on that last stage and was making up good time but then had a small crash and gave myself a bit of a stiff neck. I missed out on the podium by just seven seconds but all-in-all I’m pleased with how I rode. Navigation was really tricky here and we had to learn to ride with the minimum of information. I’m hoping that will put us in a good position for January and the Dakar Rally.”

Newly-crowned 2019 FIM Cross-Country Rallies World Champion Sam Sunderland was forced to retire from the Rally Du Maroc following a crash on stage two. The British rider hurt his elbow in the fall, but thankfully following further medical checks, the injury is not thought to be serious.

Next year’s Dakar Rally will be held in Saudi Arabia from January 5-17.