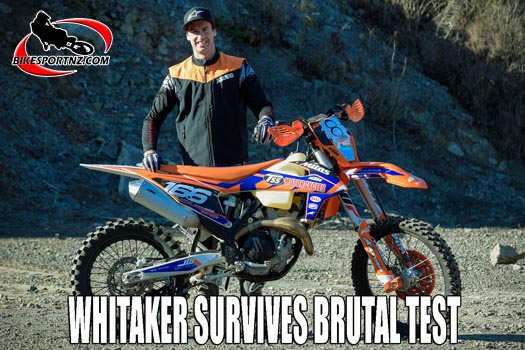 Riders of the distinctive orange KTM bike brand clean swept all three grades at round one of the Yamaha-sponsored New Zealand Extreme Off-Road Championship series on Saturday.

So would you call it a whitewash or perhaps an orange squash?

Racing in the damp Taungatara Forest, near Whangamata, was certainly a test of both man and machine.

Bronze, silver and gold level courses were offered, designed to cater for all the various skill levels, and Wainuiomata’s Jake Whitaker (KTM 350EXC-F) led a KTM 1-2-3 in the premier Gold Grade on Saturday, finishing the day ahead of New Plymouth’s Tony Parker (KTM 300EXC) and Helensville’s Tom Buxton (KTM 300EXC).

Interestingly, Kiwi international Chris Birch (KTM 250EXC) actually won the day outright, finishing nearly six minutes ahead of Whitaker, but the Thames man was classified as a non-championship rider because he will not contest the entire four-round series and was also not licensed for the nationals.

The top 12 finishers in the Silver Grade all rode KTM bikes, with veteran Huntly rider Warren Tapp (KTM 300EXC) the stand-out competitor there, while Thames woman Natasha Cairns (KTM 250EXC) led the way in the Bronze Grade at this gruelling event on Saturday.

“Yes, Chris Birch won the day as a non-championship rider,” confirmed Whitaker, a record eight-time former national moto trials champion who converted to enduro competitions competitions at the start of 2013.

“Chris had a good lead over me on lap one, although I managed to pull him back a bit on lap two. It was pretty challenging and I struggled a bit with the creek bed sections.

“I didn’t really have the bike set up properly for the long river sections,” said the 28-year-old father-of-one.

“The extreme terrain kind of suits me though and my trials riding experience helps a lot when the going gets tough like this. I think I have an advantage over many of the other riders when trials skills are needed.”

Rounds will now follow at Moonshine, off Bulls Run Road, near Porirua in just two weeks’ time, on September 22, before a two-dayer in Hawke’s Bay (at Taradale on day one and at Tutira on day two) on November 2-3.

Just as it did for last year’s inaugural New Zealand Extreme Off-Road Championship series, the competition will again wrap up with another double-header weekend, at the Nut Buster hard enduro at Oxford, near Christchurch, on November 15-16.

Only three of the four rounds of the NZ Extreme Off-Road Championship are to be counted, with riders discarding their one worst score from the three North Island rounds.