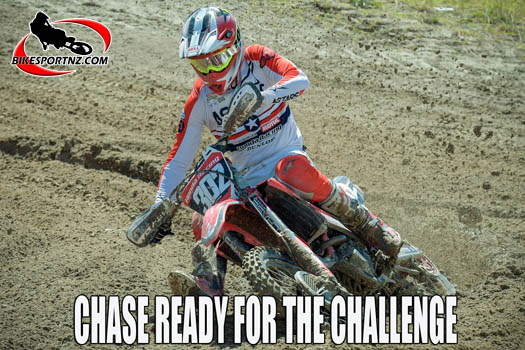 Bay of Plenty man Wyatt Chase is fizzing and can’t wait to take on the world’s elite in The Netherlands next month.

The Honda star will make his debut for Team New Zealand at this year’s edition of the Motocross of Nations – commonly referred to as “The Olympic Games of Motocross” – and he simply can’t wait to repay the faith that has been shown in him by the selectors.

“It’s simply massive to race at this event. I’ve very excited. It’s an awesome opportunity that I’ve been given,” said the soon-to-turn 20-year-old rider from Taupo.

Hundreds of truck-loads of sand will be brought in to create the MXoN track, on the infield on the Assen TT road-race circuit, giving the iconic event a unique twist and the energy-sapping sand will certainly sort the men from the boys.

A crowd of about 80,000 is expected to flock to watch the racing at this most important event on the international calendar, and Chase knows the pressure to perform will be immense.

“It will be super gnarly at Assen and extremely challenging. But I have been putting in the work and hopefully I can get a good result for the team,” he said.

His two team-mates for the on September 28-29 event at Assen will be Mangakino’s Maximus Purvis (Yamaha), who will race in the Open Class, and British-based Canterbury rider Dylan Walsh (Husqvarna), who has the MX2 (250cc) class duties for Team New Zealand.

Like Chase, both these two riders are also MXoN first-timers, although all of them have international racing experience, Purvis racing in Australia earlier this year and Walsh currently racing on the Grand Prix scene in Europe.

Chase raced several rounds of the European 125cc Championships in 2016, in the United Kingdom, Italy and Belgium.

Chase confirms his build-up to the MXoN has been going well.

Chase represented the North King Country Motorcycle Club when the annual MXoN fundraiser event – The Battle of the Clubs Motocross – was held at Taupo in June and he won the MX1 class battles that day.

And there was talk that day that perhaps Chase might be the ideal replacement for national MX1 motocross champion Cody Cooper, a Team New Zealand regular for the MXoN, with the Mount Maunganui-based Honda rider unavailable for the MXoN event this season, and that’s exactly as it’s panned out.

Chase will race a Honda CRF450 in the MXGP class at Assen, just as Cooper has done for New Zealand many times in the past.

“I rode both classes on Sunday just to give myself more of a work-out,” Chase explained. “The more time I spend on a bike at the moment, the better for my fitness.

“I’ve been putting in the hard work and I’m feeling confident. I have been riding in sand as much as I can and I will be heading down to Taikorea (near Himatangi) for some sand training sessions soon too.

“I feel the experience I have had racing in sand over the years, plus my overseas experience too will certainly help, but I’m not underestimating how tough it will be at the MXoN.”