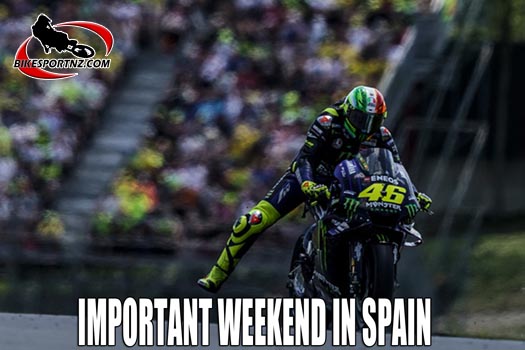 The world’s road-racing elite arrive at Barcelona for round seven of the MotoGP World Championship this weekend, each of the riders determined to improve upon their respective positions.

It is a very important round in particular for the Factory Yamaha team as the event at Circuit de Catalunya boasts the same title sponsor, Monster Energy.

After a very difficult Mugello race weekend, Italian legend Valentino Rossi (Monster Energy Yamaha) is keen to return to the front of the rider field.

He currently holds fifth place in the standings and will resume his championship battle in Barcelona, although Repsol Honda’s championship leader Marc Marquez will perhaps enjoy home advantage this weekend.

“We arrive in good form after Mugello,” said Marquez.

“The bike and I are in a very good position now, I was able to rest a little between races and I’m back to full strength.”

He previously achieved four consecutive podium finishes there in the lower classes, with a second place in 125cc (2011), a first and third place in the Moto3 championship (2012 and 2013 respectively), and a second position in Moto2 (2014). He is yet to climb onto the MotoGP rostrum in Barcelona but would like nothing better than to greet his fans from the steps of the podium.

Though the previous rounds demanded considerable effort from the Spaniard, he is feeling 100% fit. He holds eighth place in the championship rankings and is up for the challenge to climb back up the order.

Work to create the Circuit de Barcelona-Catalunya began in 1989. Two years later the track was opened, and it soon became a crowd favourite after hosting its first MotoGP race in 1992.

With an exciting 4.6km lay-out consisting of 14 corners (six left, eight right), the Catalan round is known as one of the most atmospheric and thrilling races on the calendar.

“After the complicated weekend in Mugello, we head to Barcelona, a track that I really like,” said Rossi.

“Surely it will be another challenging weekend in Spain, because we were not very competitive last time round, and we need to work hard. But we will try to do our best to fix the problems and to achieve the best possible result. On Monday there will also be a test day and we will try to work as well as possible and make the most of the occasion.”