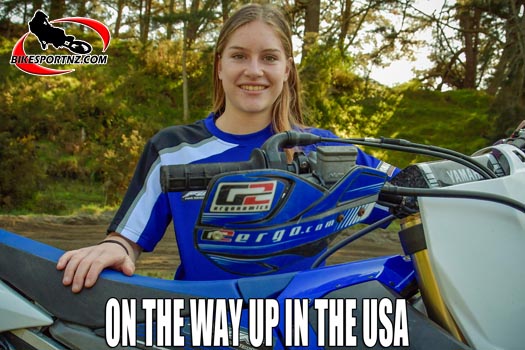 The 17-year-old from Ngaroma, near Te Awamutu, has long been a front-runner, even against the men, on the cross-country scene in New Zealand and now she’s excelling on a much larger stage.

She is currently running fourth overall after seven of 13 rounds in her first full season contesting the Grand National Cross-country Championships (GNCC) in the United States, a internationally-renowned series with races scheduled all along the east coast of the US, from New York to Florida.

She took her Yamaha YZ250F to finish the day third overall in the WXC (women’s cross-country) class at the “Tomahawk GNCC” event at Odessa, north-west of New York city, just over a week ago, crossing the finish line behind leading US riders Tayla Jones and Becca Sheets.

“I got off to an average start, but put my head down and got to work, picking my way through the pack. I eventually caught up to (Australian rider) Mackenzie Tricker by the end of lap one.

“It was from here on in that Mackenzie and I battled it out for third, up until the last lap, when I was able to pull away and take third place for myself.”

That result, coupled with her 8-5-4-4-3-3 score-card from the previous six rounds, has positioned the intrepid Kiwi fourth overall for the championship, behind Jones, Sheets and Tricker.

“The biggest thing I’ve had to adapt to racing over here in America is racing with several hundred people and having to predict not only your own line, but anticipating what line the person ahead of you is going to take, so you can pass quickly and safely.

“I’ve learnt to find lines that other people can’t see or won’t take and which definitely enhances my lap times and saves energy.

“I’m really happy with the progress I’m making and my focus is getting a championship in my first season, which is definitely on the cards if I keep going the way I have been.”

“I have two mechanics that share the work between my enduro bike and my other GNCC bike. I do the work to maintain my practice bike. When I’m out racing, there are at least four people in my support crew, pointing lines, giving water bottles, etc. They communicate via headsets and, if there’s an issue, it can be attended to ASAP, which is really awesome for me,” said Archer.

“It feels a bit surreal to think that just five and half months ago I was fresh out of school and an underdog coming into the GNCC series.

“Now I feel right at home racing and I know what to expect and what I’m capable of.

“I have two more GNCC races and two enduro nationals events to race before summer break, where I can go home during the month of August.

“Then I’ll be back to race the last four GNCCs and four enduro rounds. It will all be wrapped up by the beginning of November and I’ll be back home for my 18th birthday and Christmas. My plan is to come back again next year with bigger and better ambitions for the 2020 season.”

The next round of the GNCC is set for the Snowshoe Mountain Resort at Snowshoe, West Virginia, in just over a week’s time, on June 23.