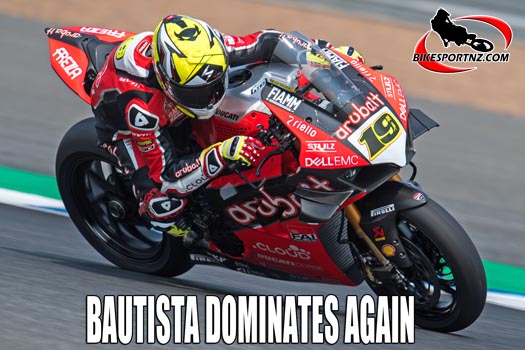 Spain’s Álvaro Bautista totally dominated the Thai World Superbike Championships round at Buriram at the weekend, continuing the trend for this season so far.

The second round of the 2019 Superbike World Championship, which took place this weekend at the Buriram circuit in Thailand, saw total domination by Aruba.it Racing Ducati team rider Bautista, who won all three races: The Superpole Race, shortened by four laps following an incident, and then both the championships points races of the weekend.

The 34-year-old Spanish rider scored his sixth successive victory by clearly getting the better of Kawasaki’s Jonathan Rea and Alex Lowes (Yamaha) in the Superpole Race.

He won the first race by 8.2 seconds ahead of Rea and Lowes respectively and then, in race two, he immediately broke away from the field, leaving his two main rivals to fight it out for second, and then powered to the chequered flag with a 10-second advantage.

It was not such a positive Sunday for Bautista’s team-mate Chaz Davies, who finished eighth in the Superpole Race, while in race two he was forced to retire due to a technical problem on his Panigale V4 R. Despite this setback, the 32-year-old from Wales showed good progress, which is a real confidence booster for the upcoming races.

With six wins to his name, Bautista is now leading the championship with 124 points, 26 more than Rea, with Lowes 29 points further back in third overall.

The next World Superbike Championship round will take place in three weeks’ time at the MotorLand Aragón circuit in Spain, from April 5-7.

“Three wins, three fastest laps and Superpole means that it has been a perfect weekend for me,” said Bautista.

“We knew that it was going to be an important race because Kawasaki have won here so many times, but the whole team worked well with the bike over the weekend and it all came good. It wasn’t easy however because the Panigale V4 R is new everywhere we go and everything has to be discovered from scratch.

“Right from the beginning I had great confidence with the bike and only made small adjustments for the set-up we know. I just want to say thanks to my team and all the people in Ducati because they have done a fantastic job, I’m so happy! Now we have some time to rest before we go to my home race. I’m really looking forward to that and can’t wait to race at Aragón in front of my Spanish fans.”