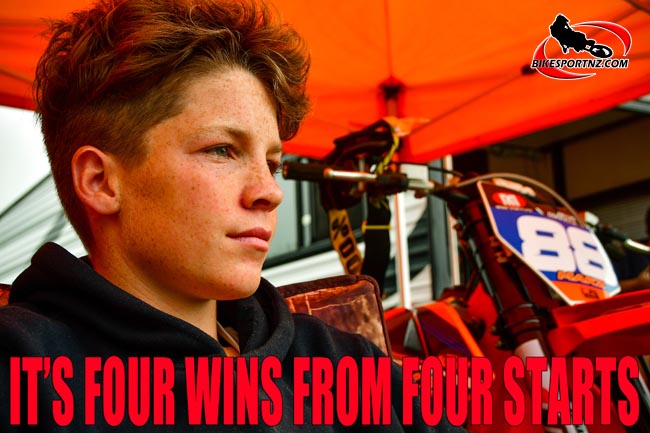 He may be one of the smallest riders on the track, but Bay of Plenty’s Brodie Connolly certainly has a lot of courage, a huge heart and he possesses giant-sized talent too.

The 14-year-old KTM rider from Tauranga was unstoppable during the junior phase of racing at the Mach 1 Yamaha-sponsored annual King of the Mountain motocross near New Plymouth on Saturday.

He not only seemed comfortable in storming to a hat-trick of wins in his 12-15 years’ 125cc class, but then he lined up against the elder riders too, some of them on 250cc  bikes, and dominated the all-in junior feature final, leading that end-of-day race from start to finish.

It was also a 1-2-3 finish for the KTM brand in that prestigious final race, with Dunedin’s Grason Veitch (KTM 250) finishing runner-up and Cambridge’s Seton Head (KTM 125) taking the third step on the podium.

Connolly said that winning this event was ideal in continuing his build-up for the upcoming Junior Motocross World Championships in Australia – that event set for Horsham, in Victoria, in August.

“That event is the main focus for me this season,” said Connolly, who will this year be a year 10 pupil at Tauranga’s Boys’ High School, but perhaps with a focus also to a career as a fulltime professional motocross racer overseas.

“This is the first time that I have won the King of the Mountain feature. It’s an all-capacities race and I finished fourth last year, that time riding an 85cc KTM.

“I think Grason (Veitch) had a small crash in the feature race today and that took some of the pressure off me. I just concentrated on my own riding and not making mistakes.

“I like this Taranaki track and riding here was good build-up too for me ahead of the Woodville GP motocross (this coming weekend). I have won my class seven years in a row at Woodville, but this will be the first time for me on a 125cc bike.”

Connolly won the 13-16 years’ 85cc class at Woodville last year and he also won the junior 85cc Champion of Champions trophy at Woodville, hinting that more big things could also be coming from him this coming weekend.

Dunedin’s Grason Veitch, on his way to winning the 14-16 years’ 250cc class on Saturday. Photo by Andy McGechan, BikesportNZ.com

Leading results from the 2018 King of the Mountain Motocross in Taranaki: