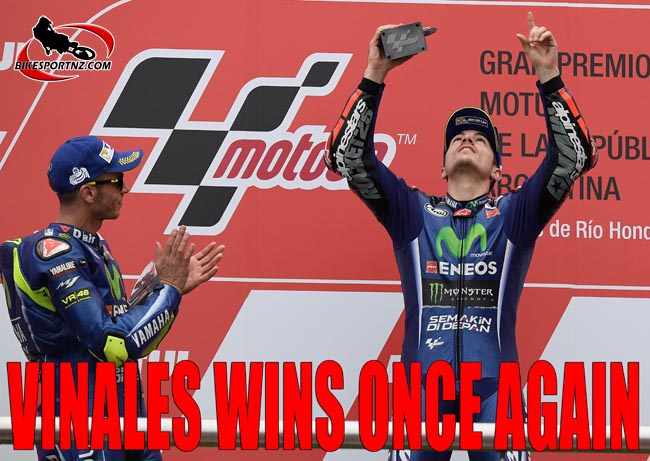 Spain’s Maverick Vinales says he is feeling stronger race-by-race after the Movistar Yamaha rider made it two MotoGP wins from two starts this season when he won round two in Argentina at the weekend.

Vinales took over at the front after early leader Marc Marquez slid out at turn two and the Spaniard went on to take victory by almost three seconds from his Yamaha team-mate Valentino Rossi.

The 22-year-old Vinales has become the first Yamaha rider since Wayne Rainey in 1990 to win the opening two races of the season and Vinales says he is ‘living in a dream’ during a stunning start to his career as a factory Yamaha rider, which saw him win first time out in Qatar in March.

“It was a difficult race, very difficult. I started from sixth position and the start was not so bad. I found my way to overtake the riders as fast as I can and finally I arrived behind Cal [Crutchlow],” he said.

“I struggled to overtake Cal because he is a really good braker. Then once I overtake Cal I thought ‘I have to catch Marc’ because he was going so fast. I was pushing my 100 percent and after I tried to make my own pace: the pace I did in the warm-up, I tried to make it the same. Cal was still behind and it was a difficult race to pull away but I am so happy.

“It’s like being in a dream and it’s so incredible. I have to say thanks to the team because they are working hard in the box and it’s not only my victory, it is the victory of the team because they did great. In these two races we have felt strong from the beginning on the Friday already from the first lap and that’s very important,” Vinales added.

“For the next races we have to try and continue like that. The team is really motivated and so is the team and the Yamaha has a great performance right now. Race by race I feel stronger and I’m so happy and pleased because two victories in a row is so incredible.”

For Vinales, his victory at the Termas de Rio Hondo circuit represents a turnaround in fortunes in Argentina, where he has fallen twice in three races in recent seasons.

“If someone had told me I would win the race in Argentina I would have said it was almost impossible because always in Argentina I have really bad luck and from three races, I crashed twice. It was difficult but we are in a good moment and I could give my 100 percent,” he said.

“When I can ride how I want I can do a good rhythm. We are in a dream with two consecutive wins in my first season with Yamaha.

“It’s difficult to believe you can start like this and after all the pre-season in the front, two races in a row is something incredible and it gives us a high motivation. We have to keep in the right way and keep working really hard. We know we have a good bike but still we can improve. Austin is a good track for us and I think there we can improve our bike a lot.

“Today I was thinking a lot on the bike and how to use the maps to save the tyres in case someone was coming from the back. Finally I did a really good race and I was really calm,” Vinales added.

“I enjoyed it a lot and riding that bike was really incredible. When I passed through the finish line on the last lap the feeling was amazing.”

Repsol Honda’s Marquez is unbeaten in the premier class at Austin in Texas, where the third round of the championship is up next in two weeks’ time. However, Vinales rates the circuit as one of his favourites and is quietly confident he can maintain his winning streak.

“I know Marc is really good there but also it is one of my favourite tracks and one of the tracks where I go more fast, so we are going to try to go there with the same mentality. We will try to make a good set-up and we know already that we have a good bike and we only have to know the way to go fast,” he said.

“We will work hard and Texas is a really good track for me with changing direction and really fast corners and hard braking. I’m quite confident we can do a good result there.”