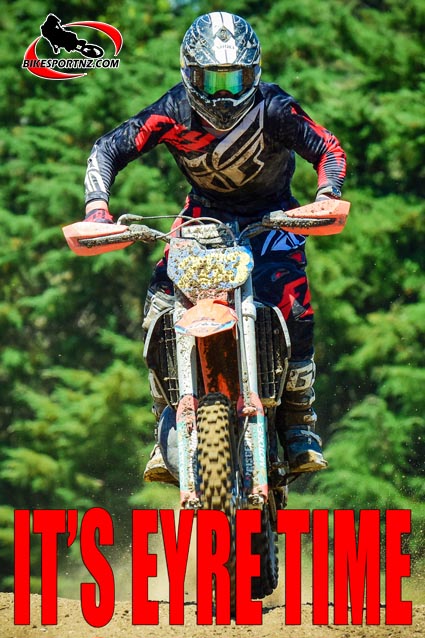 There was a distinctive orange hue to the podium as KTM bikes hogged the limelight when the 2016-17 Bel Ray cross-country series wrapped up near Huntly at the weekend.

Greenslade finished second and then first respectively at the earlier two rounds of the series, setting himself up brilliantly for Saturday’s third and final round.

He won easily on Saturday, crossing the finish line more than a minute ahead of the day’s runner-up rider, Te Kauwhata’s Jacob Brown (KTM 250XC), with third-placed Nathan Tesselaar (KTM 350XC-F) of Taupo, another minute further back, with that also making it a KTM 1-2-3 for the day.

In the junior race, held earlier in the day, it was Te Awamutu’s Daniel White (Kawasaki KX250F) who crossed the finish line first, but a runner-up result on Saturday was enough to give 16-year-old Eyre the series victory overall.

White had not contested the earlier rounds of the series, while Eyre had finished third and second at the earlier two rounds, ensuring he was locked in a battle with national junior cross-country champion Logan Shaw (Honda CRF250), of Raglan, for the Bel Ray series honours.

However, when Shaw failed to finish on Saturday, it handed Eyre a massive boost and eventually gave him a 16-point series win over Shaw.

“I already had a good grip on the under-200cc class trophy and I wasn’t thinking too much about beating either Dan (White) or Logan (Shaw) because it was hard work trying to match their 250cc horsepower,” Eyre explained.

“But, when Logan didn’t finish, I had the overall victory in the bag, as long as I could finish too.”

And finish he did, albeit some distance behind White, who had to complete an extra lap when he came into the timing zone with time still left on the 90-minute clock, but Eyre was still 22 seconds ahead of the day’s eventual third-placed rider, Hamilton’s Caleb Richardson (KTM 250EXC-F).

“I started the day not thinking that I could win the series overall,” said Eyre. “There was a bit of a battle between the three of us – me, Daniel and Logan – but my focus was really just on making sure I could win my under-200cc class.

“It was a fast track and it was hard trying to keep up with the 250cc four-stroke riders.

“I guess I got a bit of luck favouring me today, but I’ve had back luck too in the past. I think the big difference for me now is the fitness work I’ve been doing in training. That’s certainly paid off.”

Eyre now readies himself to tackle the upcoming North Island Cross-country Championships and then, after that, the nationals.

“I’ll have to step up to the senior grade for the nationals because I’ll turn 17 during that series,” said Eyre, a year 13 pupil at St Paul’s Collegiate School in Hamilton.

Meanwhile, Otorohanga’s Jan-Maree Pool (KTM 350 EXC-F) wrapped up the women’s grade in the Bel Ray series when she completed a clean-sweep of wins in the grade on Saturday.