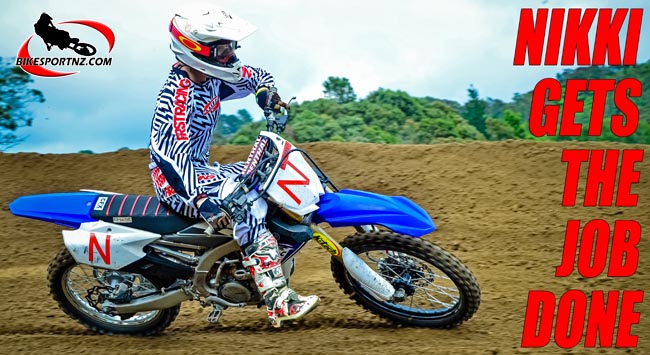 She has lived and raced all around the world, and it was a rare pleasure for fans to see Nikki Scott recently extend her “never-ending summer” lifestyle to New Zealand.

Over the past few years the 25-year-old from the Manawatu has carved a niche for herself as a member of the Youthstream staff, the organising body for the motocross world championships – what some fans of the sport might regard as “living the dream” – and her travel plans this year were able to include a brief trip back from Europe to Palmerston North to spend Christmas with her family.

Scott even managed to fit in a little bit of racing during her time in New Zealand, lodging a surprise rare entry in the women’s class at the big annual Whakatane Summercross just after Christmas, and that last-minute decision turned out to be a winning one.

Racing a borrowed Yamaha YZ250F, Scott finished 1-1-2 against the cream of Kiwi women at Summercross, winning the class ahead of fellow Yamaha ace Jessie Waterhouse, of Tauranga. Third best in the class was Auckland’s Julie Greenslade (Kawasaki KX250F).

“It was great to come home to summer while it’s snowing in Europe. It gives me a never-ending summer because I’ll go back just as it’s starting to warm up over there again.

“It was a last-minute decision to race Summercross and I borrowed a bike from the Chase family (of Taupo). It was Cohen Chase’s spare bike and I had the use of it on the understanding that, if he was breaking bits, they’d take what they needed off my bike. That was okay, I was just happy to have the opportunity to ride. Josh Coppins (the boss of the Altherm JCR Yamaha Race Team) was also helping me out.”

Fortunately for Scott, Chase suffered no problems on his way to winning his junior 12-17 years’ 250cc class.

“I don’t get to ride much these days,” said Scott. “My work with Youthstream is pretty full-on and I think I only raced about six times all last year.

“So that also meant I found Summercross a tough event to do. I didn’t come here expecting to win and I had no strength left at all for the final race. My arms were jelly and I could barely hang on.”

Scott returns to Europe on January 17. She is now based in the United Kingdom, near Brighton, having moved there from her previous base in Belgium during last year, and she will commute to the various Grand Prix events throughout Europe this coming season.

“I’ve been based in Belgium for the past five years but moved to the UK last October. I just needed to be in an English-speaking country. It makes things a lot easier being able to understand TV and go out to places where everyone speaks English. I do speak a bit of Dutch and I get by okay. A lot of the Europeans do speak English.

“People back in New Zealand probably think I’m living the dream, but they only see the glamorous side of it. They don’t see the long hours and all the travelling. I’ve invested a lot of time in working for Youthstream and don’t really have a life outside of motocross.

“I’m on a first-name basis with all the GP stars and have some good relationships there and that’s a lot of fun.”

Scott expects her next trip back to New Zealand might be about September, when the GP series winds up for 2015, and perhaps another Summercross assault will be a part of her plans too.