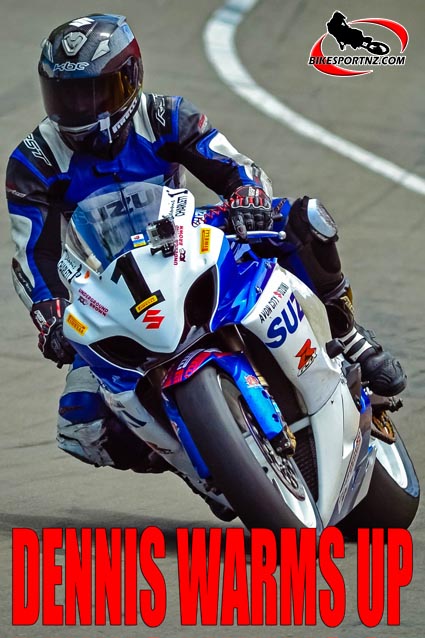 Canterbury’s Dennis Charlett has the No.1 on his Suzuki superbike for a reason – he’s the 2014 national champion – and he showed on Friday that he might be the man to beat again in 2015.

The 46-year-old Christchurch man, also a former national road-race champion in the 125cc and 600cc classes and the 2012 winner of the big annual Suzuki Series, was unbeatable in the Formula One/superbike class at the 25th annual Port Nelson Streets Races on Friday, January 2, a superb way for him to welcome in the New Year.

It was Charlett’s fifth King of the Port title win, making him the first rider to win the main event five times.

He beat McKenzie in all three F1/superbike class races, before also heading McKenzie across the finish line in the eight-lap finale, the feature race that included all of the day’s top performers from the other bike classes as well.

“Any win is special but to do this in front of my family; my cousins and uncles and aunties are here and everything,” said Charlett (Underground Brown Suzuki GSX-R1000) afterwards.

“It’s absolutely awesome and it’s good to be back. Unfortunately I couldn’t come last year but it’s fantastic to be here, the atmosphere was great.”

“It’s a little bit slower than on a (purpose-built) circuit, but it’s still really fun, there’s a lot of challenges and it had a lot more character to it this year.

“It doesn’t matter what race it is you always feel a bit of pressure. I always get nervous but I still love it and I want to carry on doing it.”

The premier class win was an important confidence-booster for Charlett because he begins his national superbike title defence at the first of four rounds in the 2015 New Zealand Superbike Championships at Ruapuna, on the outskirts of Christchurch, next weekend.

Charlett will also be respectful of former national superbike champion Tony Rees, the Whakatane rider who won the final round of the 2014 Suzuki Series at the Cemetery Circuit on Boxing Day, Taranaki’s perennial top-10 finisher Hayden Fitzgerald, and even superbike class newcomer Jayden Carrick, of Wanganui.