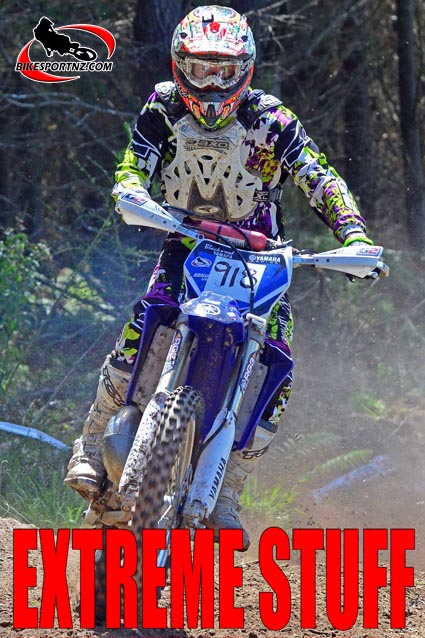 Mokau’s Adrian Smith likes a challenge and this weekend it will be an extreme one.

The Yamaha ace will take his Blackwood BikesportNZ.com YZ250 machine into battle at round two of the KTM Extreme Enduro Championships in the Riverhead Forest near Auckland – the Riverhead 100 – determined to put a stop to arch rival Chris Birch and, actually, any other rider who stands in his way.

Auckland’s Birch won the series opener near Christchurch last month, while 2013 national cross-country champion and former national enduro champion Smith had problems at that event and is now forced to “play catch-up” in the points.

“I lost my brakes on the first lap at the opening round, and the entire race was only three laps anyway, so that cost me a lot. I still managed to claw back to finish fifth, but it wasn’t the best result of course,” said Smith.

“It was a bit of a disaster actually. But, in saying that, it’s not a huge loss and anything can happen in extreme racing, so I’ll be pushing hard on Sunday and you never know …

“I usually go well in the Riverhead Forest, although I’m expecting it will be very dusty and, among the tight trees, that can be a problem when you’re trying to go fast.

“I’m not sure what to expect. It should be interesting. I am feeling pretty fit at the moment and I’m loving the bike. Someone like Birch is always hard to beat, but I’ll never give up trying.”

Smith’s Yamaha team-mate at the recent Acerbis Four-Hour dirt bike marathon near Taupo, Titirangi’s Callan May, will also be a contender at the Riverhead 100.

Work commitments prevented May from contesting Canterbury’s series opener, but he will relish the opportunity to get among the points when he races his Kiwi Rider BikesportNZ.com Yamaha YZ250F in the Riverhead Forest on Sunday.