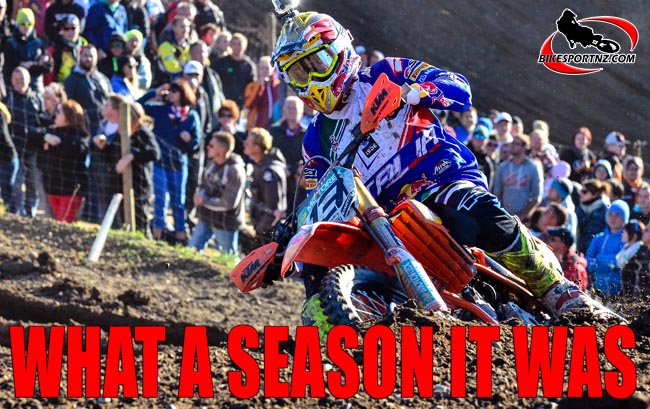 With the 2013 season now over it isn’t difficult to look back at this year’s FIM World Motocross Championships and feel it has been a pretty special season.

From the very moment the GP circus rolled up at the Losail circuit in the outskirts of Doha, Qatar, we all knew something special was about to happen.

From that very first night GP race and the Superfinal, the season just continued to produce magic moments. Thailand with its friendly people, magnificent circuit and warm weather conditions we all knew that we were in a good place.

Back to a colder Europe and Valkenswaard, one of the true old school circuits on the calendar, and victory for Mr Jeffery Herlings on his beloved sand circuit. It was old school again when we ventured to Trentino, Italy and Sevlievo, Bulgaria.

Great weather again as the red dirt of Agueda, Portugal, for round six produced great racing. This was followed by the exotic Brazil and Beto Carrero. Again red dirt, but a long way from Europe, however another major stop in the GP season of 2013.

Ernée, France, the same place that Ricky Carmichael dominated the World at the 2005 Motocross of Nations and where Stefan Everts ended his GP career in 2006. As always the huge hillside spectator area got to witness great Motocross racing.

The next round was a highlight. The Grand Prix of Italy was the high point as we arrived at the Maggiora circuit in the north of Italy. So much history and an MXoN type atmosphere as Antonio Cairoli (pictured above) tried to win his home Grand Prix, only to lose out in a fight with Gautier Paulin.

This was pure motocross, and brought another magic moment for the season.

Sweden, Latvia and Finland followed as we visited more sand circuits and large crowds arrived to give these events the total package. Then onto Lausitzring in Germany as we ventured into something new – another road racing facility with its perfect clean feel. It was a well organised event and one of the best circuits of the year.

Loket once again got to share something special as Jeffrey Herlings would be crowned World MX2 Champion, his charge to become one of the true legends of the sport was on track. Title number two at the old school facility.

Back to Belgium, the place many say is the home of European Motocross, the richest country for MX success. Bastogne was like most Belgian GPs a big success as the fans came out in their numbers to watch Clement Desalle try and win at home.

Just 20 kilometres from where the first ever Motocross race was held many decades ago, it was Matterley Basin that held the second last round of the 2013 season. The Festival of Motocross was a huge success with hundreds and hundreds of riders and a large crowd to cheer Antonio Cairoli onto his seventh FIM World Motocross Championship.

Finally, with the MX1 and MX2 championships decided we ended the season at Lierop. One of the most popular rounds of the GP series, always a large crowd and amazingly often great weather. Shaun Simpson picked up his debut GP win, and Jeffrey Herlings riding with an injury scored another home win in sand.