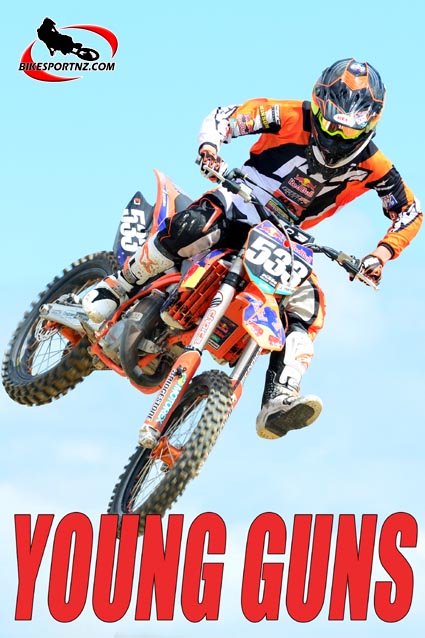 The team this week announced its rider line-up for the coming New Zealand motocross season and it has a sharp focus on young talent, featuring three rising stars of the sport.

The teenage trio who will make up the squad for the 2014 season are Atiamuri’s Hadleigh Knight, Takaka’s Hamish Harwood and surprise newcomer Josiah Natzke, of Hamilton (pictured here).

Each of these riders are already national champions, although they are far from finished with the business of winning races and collecting trophies.

“It is so exciting to have these guys on board,” said CMR Red Bull KTM team manager Cannon Smith, of Auckland.

“CMR Red Bull KTM is looking to the future of these talented young riders and to nurturing them.

“I want to say ‘thanks’, too, to Patrick Stafford of KTM New Zealand for supplying the bikes and making it all happen.”

Harwood arrives home fresh from his barnstorming campaign in Australia where he collected the Under-19 Development Motocross crown for 2013, making it two Kiwi KTM riders in a row to take the silverware across the Tasman after Mangakino’s Kayne Lamont won that title in 2012.

Knight now concentrates on the senior 125cc class for 2014.

Kiwi international Natzke joins the team this season already with an incredible list of credentials and undoubtedly a huge future ahead of him.

“Firstly, I have only good things to say about Yamaha, but I am really excited for this weekend (at the Labour Weekend Motocross Extravaganza in Taupo) when I will have my first ride for KTM,” said the 14-year-old Natzke.

“I last rode a KTM in the 65cc class in 2008. I feel I have very good prospects for the future with KTM and good opportunities for racing overseas. It was certainly a good offer and it’s great to be a part of a team.”