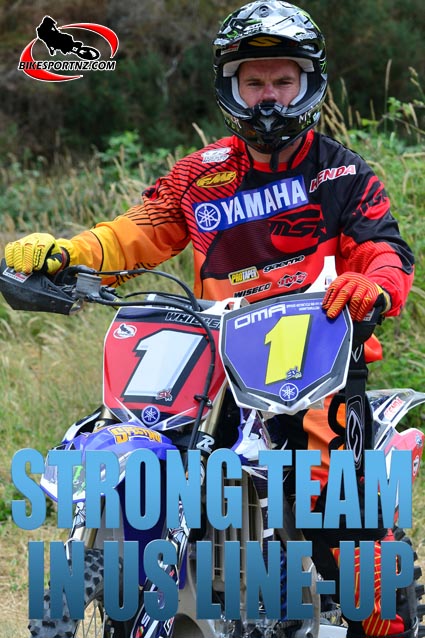 After an incredible year of racing in 2012, the AmPro Yamaha Factory Off-Road Team is excited to announce that the ink is dry on the 2013 contracts.

Heading into the New Year, the team had several announcements to make – the first and perhaps the most exciting, is that it has taken over the Factory Yamaha ATV Program for the entire 2013 GNCC series while, at the same time, it has ensured its motorcycle programme would remain as strong as ever.

The team was thrilled to announce that the 2012 GNCC and OMA National Champion Paul Whibley, of New Zealand, would be returning to the team for another great year of racing.

“I’m looking forward to getting back into the States and down to the AmPro Yamaha Team base,” said Whibley.

“We have a solid platform there and after spending the last three years building our program, it feels like we are heading back to our family. It’s been nice to chill here in NZ for a while but it’s time to get back to business. I have begun training again in preparation for the 2013 season, after what seems like an ever shrinking offseason. I’m looking forward to running the No.1 plate on the bike and trying to fend off the challenge from the pack of hungry young riders.”

The AmPro Yamaha Factory Off-Road Team was also very excited that the hard-charging Jordan Ashburn would be rejoining the team, racing the full GNCC series and select OMA nationals aboard his 2013 Yamaha YZ450F.

Another very exciting announcement is the addition of Jesse Groemm, a New Jersey native who specialises in tight technical woods riding. He will be racing the entire National Enduro Series for the AmPro Yamaha team aboard a 2013 YZ250 two-stroke as well as select GNCC races aboard a 2013 Yamaha YZ250F.

“This is truly an opportunity of a life time for me,” said Groemm. “I can’t thank AmPro enough for giving me a shot at my dream. I love racing the National Enduro Series and look forward to a year of learning and mentoring from one of the best enduro racers in history.”

With several amateur championships under his belt and multiple second place seasons, Walker Fowler will be flying the AmPro flag in the ATV class, riding a 2013 Yamaha YFZ450R, with the goal of obtaining his first-ever national championship.

“I’m ecstatic to be riding for Randy Hawkins and the AmPro Yamaha team for the 2013 season,” said Fowler. “I have seen first-hand the successes Randy’s team has had over the past few years and I’m very excited to see what he can bring to the table. With my skills on the track and Randy’s in the pits, I’m confident we will be a contending threat on the 2013 GNCC tour.”