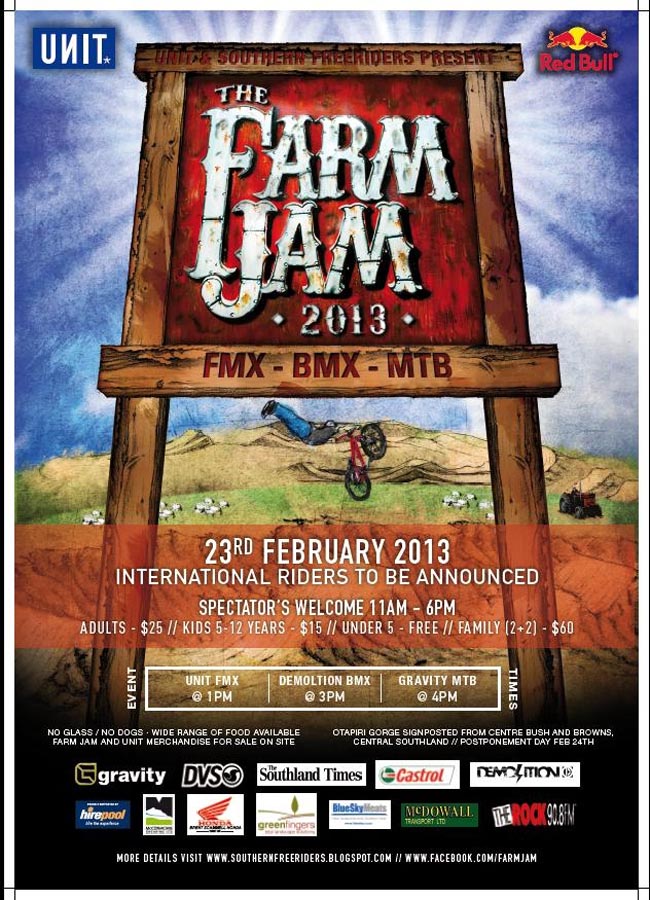 As interest reaches a fever-pitch for the 2013 instalment of the unique NZ Farm Jam, organisers have announced some of the world’s best riders across FMX, BMX and MTB have thrown their hats in the ring.

The Farm Jam began in 2008 on the 2,600-acre sheep farm belonging to brothers Dan and Brett Frew, in Otapiri Gorge, Southland, New Zealand.

From its humble beginnings it has rapidly grown into a bucket-list event for two-wheeled action-sports athletes, attracting some of the world’s biggest names in BMX, FMX and MTB.

The “jam” formats see each sport judged solely by the riders, with significant emphasis placed on judging riders from other disciplines.

Thousands of spectators flock to the highly-anticipated annual event.

But it’s now set to get even bigger as three-time X Games BMX Dirt legend Corey Bohan enters to contest the BMX contest this year, alongside the likes of always-charging American Mike “Hucker” Clark, and a swathe of Australasia’s best 20-inch dirt riders.

The FMX contest has seen unprecedented interest from both sides of the Tasman. The likes of defending champion Tyrone Gilks, Nitro Circus rider Matt McFerran and Australian FMX legend Matt Schubring are set to take on a host of Kiwi rippers including Nick Franklin and Callum Shaw.

The new-look moto format will incorporate a media-and-rider-only free-riding contest as well as the conventional FMX competition.

Things get even wilder in the MTB discipline as crazy Spaniard Andreu Lacondeguy has put his hand up to ride not only the 26-inch bike, but the FMX competition as well. While Lacondeguy is well-established as an indomitable freeride MTBer, he also spends a lot of time ripping up the FMX ramps and has a large bag of tricks to bring to the contest. Andreu and Czech MTB rider Tomas Zejda will take on Kiwi legend Kelly McGarry and reigning champion Conor Macfarlane in a battle for the MTB crown.

“We can’t believe the quality and quantity of riders we’ve had voice their interest to ride the NZ Farm Jam this year,” says organiser Brett Frew.

“This year we’re really ramping things up to push the Jam to a new level. We’re excited of the buzz that’s being built around the 2013 event.”

Co-organiser Dan Frew says they are busy developing and extending the FMX, BMX and MTB trails to continue the event’s progression.

“We’re always looking to progress the established lines and courses,” he explains. “This year we have received sponsorship to make some big improvements. On top of that we plan to have a crew of builders on hand all day to ensure the trails are kept absolutely prime.”

Held at the bottom of New Zealand’s spectacular South Island, the Farm Jam has continued to flourish as one of the world’s premier multi-discipline events combining natural-terrain freestyle motocross, BMX dirt and mountain-bike dirt-jumping.

Every year the unique contest attracts thousands of spectators and some of the world’s biggest names in two-wheeled action sports.

Sponsors already locked in for the sixth instalment of the NZ Farm Jam include long-time supporters Red Bull, Unit and Gravity Components. DVS Shoes and Demolition have also stepped in alongside the event’s existing team of minor sponsors.