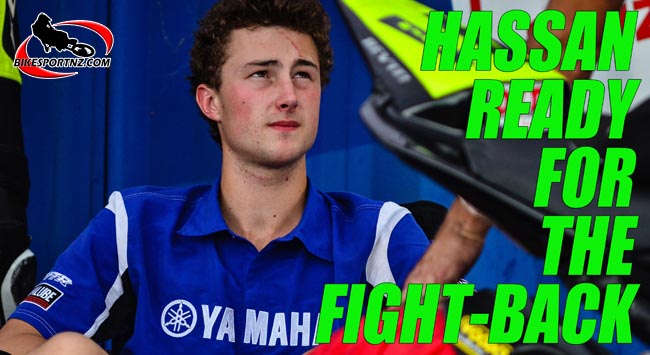 Auckland’s Jaden Hassan may be down, but he’s far from out.

The teenager from Westmere experienced a massive set-back at the second round of five in this season’s New Zealand Superbike Championships at Timaru just over a week ago, suffering a crash that would most likely have spelled the end of the title campaign for any lesser rider.

But 600cc Supersport class rider Hassan is made of stern stuff – he showed up at round three at Teretonga, near Invercargill, at the weekend with his broken left wrist securely braced and he declared himself ready to race.

The winner of the equivalent Formula Two class title at the pre-season Suzuki Tri Series, Hassan was tipped as one of the favourites to win the 600cc class at the nationals this season.

And so it proved with the 18-year-old taking his Homebuyers Reports Yamaha R6 to finish the day first equal overall, level with Christchurch rider John Ross (Repsol Suzuki GSX-R600), at round one of the national championships series, on the outskirts of Christchurch just over a fortnight ago.

Then there was the mishap at round two, the bike spitting him off at high speed during the preliminary qualifying session.

He braved the pain to nurse his way to an unaccustomed 12th in the first of two 600cc Supersport races the following day and then, sadly, withdrew before the start of the day’s second race.

“I want this championship really badly and will do anything to keep my hopes alive but it was just too painful and I couldn’t hang on,” he explained.

That 12th placing and subsequent no-show meant he slipped from first equal in the standings to a distant and disappointing fourth in the championship rankings.

The wounded Hassan knew he had some work to do when he showed up at Invercargill’s Teretonga Raceway at the weekend, but he was soon on the attack.

Remarkably, he qualified his Yamaha fastest, then he weathered the pain to battle his way to third and second in the two races. Ross won both races and extended his championship lead but at least Hassan was back in the hunt and he had done well enough to elevate himself from fourth to second on the points table.

“I didn’t quite do enough to beat John Ross at Teretonga, but I know I can win races at the two North Island rounds coming up.”

The series takes a short break now, before resuming at Hampton Downs, near Meremere, on March 16-17. It wraps up with the fifth and final round at Taupo Motorsport Park on March 23-24.

Hassan will be a lot further down the road to recovery by the time the series reaches Hampton Downs, a circuit at which Hassan was unbeatable during the Tri Series in December.

“I hold the lap records at both these North Island tracks. Unfortunately John Ross can probably win the championship from here, even just by finishing second to me, if that’s how it works out.

“Put it this way, I wouldn’t wish ill luck on anyone but if I was to win every race from here on and he was to finish third or fourth a couple of times, I wouldn’t be disappointed.

“The accident at Timaru wasn’t my fault. It was just one of those things that happen in motorsport. I’m happy with the way I’m riding at the moment and I believe I can get the job done.”

He can take nothing for granted, though, with several very fast men nipping at his heels, Katikati’s Rhys Holmes (John Tuhoe Racing Yamaha R6) just one point behind him in third and Rangiora’s Jake Lewis (Bob McCleary Yamaha R6) just three points further back in fourth.