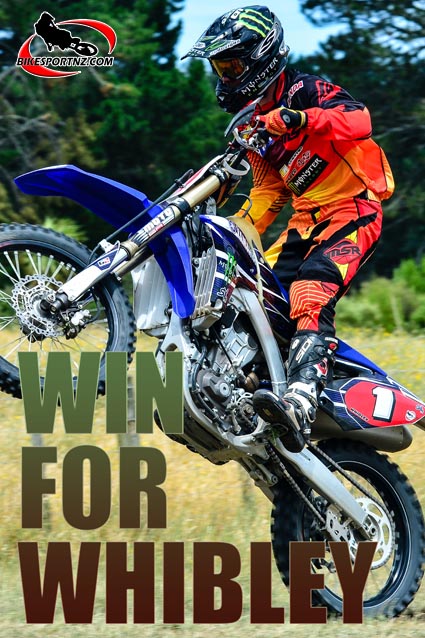 Pahiatua’s Paul Whibley is making the most of his time back in New Zealand, the Kiwi international’s build-up towards another cross-country motorcycle campaign in the United States now reaching full speed.

The 34-year-old former Manawatu forestry worker, affectionately dubbed “The Axeman” on the motorcycling scene, won two major cross-country titles in the US last season, clinching the Grand National Cross-country Championships and the Off-Road Motorcycle and ATV crown as well.

The Yamaha ace used the second round of the Bush Riders’ Motorcycle Club’s cross-country championships to continue his 2013 pre-season preparation at the weekend and his fellow competitors stood almost no chance at all as Whibley turned up the heat.

“The shot gun blast rang out for the start of the race and I jumped on and kicked the Yamaha YZ450F into life. I was first to turn one and across the line,” said Whibley.

“There were some nice bulldozed tracks that led us around the edge of a creek early in the lap, before we headed out into some of the more open farmland.”

Woodville’s Ben Exeter fought past Aucklander Callan May mid lap and managed to keep sight of the fast-flying Whibley for at least the opening stage of the race.

“A nice pine tree section brought us back down to the scoring chicane and pits. Ben wasn’t too far behind so, with one lap in the books, I tried to up the pace and hide from the pack.

“A few spots began to cut up with some bikes getting stuck in one bog near the end of the lap and the creek crossing got deeper as the race progressed.

“After three laps I was in and out of the pits with Grant Christie lending (my wife) Katherine a hand to gas up. I had pulled clear of the chasing riders and was back on track before they came into sight.

“The creek crossing got pretty tough with bikes stuck in the ruts that climbed out the far bank and seeing a bike endo as it dropped in, a cautious approach was taken. Three more safe laps and the chequered flag came out.

“I take my hat off to the Bush Riders’ club for stepping up their race presentation. Plenty of banners around the pits looked good and a podium celebration post-race with nice plaques for the top three finishers.”

Whibley will race just one more time in New Zealand – in the river race at the 52nd annual New Zealand Motocross Grand Prix at Woodville this coming weekend – before he heads back to his base in South Carolina, on the east coast of the US.