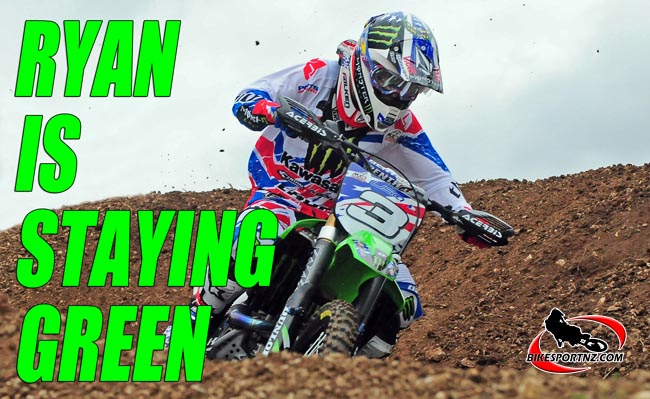 American supercross champion Ryan Villopoto has re-signed with Kawasaki, the 2012 AMA Supercross Champion set to team with Jake Weimer again after signing a multi-year deal with the team.

“Our goal from the beginning was to have the best riders on the track and we have that with Ryan and Jake,” said Reid Nordin, Kawasaki Senior Manager of Racing. “The guys work extremely well with each other, and have both had exceptional seasons. The entire team continues to work hard to improve. We are looking forward to having two Kawasaki’s on the podium and continued success for many years to come.”

In 2011, Villopoto won the Supercross Series, the AMA 450 Motocross Championship, the Motocross of Nations Chamberlin trophy, and the Monster Energy Cup. While he managed to defend his Supercross title, he missed the entire 2012 outdoor season with a knee injury.

Villopoto has been with Kawasaki since his amateur career as part of Team Green. He has a Supercross Lites West Region Championship and three 250cc motocross championships. He won his first Supercross in 2009 and has since accumulated 24 Supercross wins, a mark that puts him seventh on the all-time win list.

Weimer competed in his first full season on the team this year, finishing fifth overall in Supercross. And he has gone it alone in the outdoors this year for the team while Villopoto rehabs his injury. He is currently fourth in the series standings heading into the finale this weekend in Lake Elsinore, California.

Both riders will compete in the Monster Energy Cup in Las Vegas on October 20.