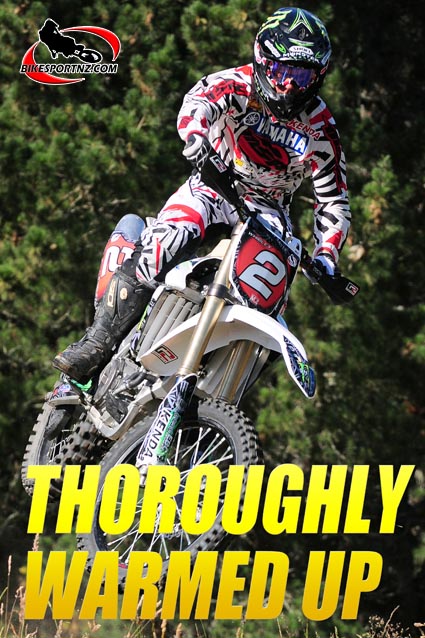 Pahiatua’s Paul Whibley is building up a head of steam as he prepares for the resumption of the Grand National Cross Country Championships series in the United States.

The Yamaha ace won the latest round of a lesser event, the Mid-East Hare Scramble Series, in Jonesville, South Carolina, at the weekend in his last warm-up event before the 13-round Grand National Cross-country Championships (GNCC) start up again with round 10 at Unadilla, near New York, this coming weekend.

Whibley knows that it is vitally important that he “hits the ground running” when the GNCC series re-starts after the summer break and the win at the weekend also sends a loud message to his GNCC rivals that he is ready, willing and more than capable of snatching away the crown in 2012.

“The six-mile track was pretty tight and plenty of roots were starting to rear their heads after the morning events. I drew 11th pick of the gate but somehow still pulled the holeshot and led the way through the first lap.

“Everyone just followed me as I searched for the trail in the fresh section that was added for our event. Once one lap was on the board, I was able to lift the pace and start to stretch the field out.

“Jesse Robinson showed me a wheel once or twice on the first lap but now that it was clear where the trail went I was able to start to open a lead.

“(My wife) Katherine brought me in for fuel just over the hour mark. I had moved out to around a two-minute lead and set about extending that as I re-entered the race for the final few laps.

“A few sections were giving riders some grief with the ruts becoming pretty deep in the gullies and hollows that the trail looped through.

“With the (last lap) white flag waving and a safe lead, I was able to relax and enjoy the last lap, closing out the race with nearly a five-and-a-half-minute lead. Jesse maintained his hold on second place with Casey Leatherman putting in a strong ride to claim third.”

It has been a truly remarkable season for the 34-year-old Whibley.

He was unbeaten on his way to wrapping up the title win in the eight-round Off Road Motorcycle and ATV (OMA) series last month,

The former Manawatu forestry worker, known affectionately in motorcycling circles as “the Axeman”, had won the OMA title every year since he first won it in 2008 but none of his victories were quite as comprehensive as this year’s eight-race OMA series win streak.