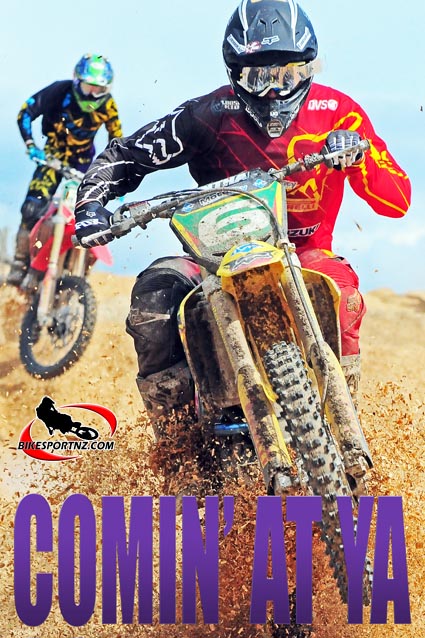 It is mate versus mate; champion versus champion; brand versus brand like never before this season.

It is a rare scenario indeed, but this season’s New Zealand Motocross Championships – kicking off near Timaru on Sunday – will feature all of the nation’s top international riders.

Kiwi internationals Cody Cooper (Suzuki), Josh Coppins (Yamaha) and Ben Townley (Honda) are all racing closer to home in 2012, meaning all three men are in this part of the world for the annual domestic contest.

Mount Maunganui’s Cooper will have a tough job defending his MX1 crown, with former world championship Grand Prix star Coppins, of Motueka, and 2004 MX2 world champion and 2007 American supercross champion Townley, of Taupo, all showing in recent weeks that they have the pace to win.

The MX2 class, too, is a hotbed of talent with 43-year-old Darryll King back to defend his crown and determined to fight off the advances of younger riders such as Luke Burkhart, the MX2 winner at Woodville just over a week ago, and Queenstown’s Scotty Columb, now back in the sport and winning races after an almost two-year hiatus.

Last year’s national 125 champion, Ethan Martens, of Waitakere, also steps up to the MX2 class this year and he adds heat to the furnace, along with riders such as Kiwi internationals Kayne Lamont, of Mangakino, John Phillips, of Rotorua, and Rhys Carter, of Mount Maunganui.

It would also be perilous to ignore riders such as Tauranga’s Peter Broxholme, Hamilton’s Jesse Wiki, Taupo’s Cam Dillon, Auckland’s Shaun Fogarty and Cambridge riders Damien King and Kieran Leigh, and out-of-retirement Daryl Hurley, all of these men capable of winning races in the MX2 class.

The 2012 series runs over four rounds, starting this Sunday (Feb 12) in South Canterbury, before heading north for round two at Patetonga, near Morrinsville, on February 26, then heading to Pukekohe a week later, on March 4, with the final round set for Taupo on March 18.