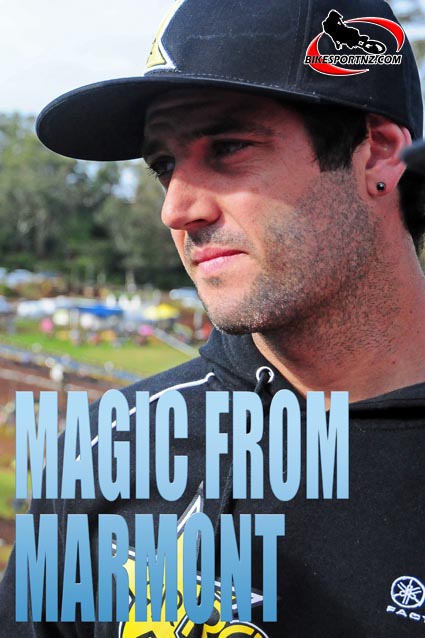 It was non-stop action at the final round of the Monster Energy Super X, the Australasian Supercross Championship, in Ipswich on Sturday night as both CDR Rockstar Yamaha’s Jay Marmont and JDR Motorex KTM’s Matt Moss claimed championship victories in front of a packed and animated crowd at North Ipswich Stadium.

Marmont went into the final round five points in front of JDR Motorex KTM’s Tye Simmonds and it was obvious he meant business all day long, looking dominant every time he entered the track. It was no different in the 20 lap final as he took the holeshot and checked out for the win, which gave him his first ever Monster Energy Super X championship to add to his record breaking fourth straight national motocross championship earlier in the year.

In the battle for the remainder Open class podium places Monster Energy Kawasaki’s Billy Mackenzie held second place at the start of the race, but a minor mistake allowed Simmonds to catch up and make a pass. Simmonds couldn’t match the pace of Marmont to make any ground on this year’s Super X champion, but finished with a comfortable second in the race and the series overall.

Hart & Huntington’s Chris Blose finished the race in third after he overtook Mackenzie, who he had a stoush with after a collision in the man vs man race earlier in the night. Dan McCoy finished sixth, which was enough for him to finish third overall.

“I am over the moon! I have had nervous jitters all week and worrying that something would go wrong with the bike or I would crash, so I am so glad to have ridden well and finish with a win. I really want to congratulate Tye [Simmonds] and Dan [McCoy] who both rode great all series. A huge thanks you to my team for all their hard work and of course my family for all of their support,” said Marmont.

Matt Moss entered the final round with a solid 10-point lead over his closest competitor, Monster Energy Kawasaki’s Dean Ferris, so was feeling confident as he lined up for the 15 lap final.

America’s Carlton Dry Thor Honda’s Gavin Faith took the holeshot just ahead of Moss and held a good lead over Moss for most of the race, but Moss kept gaining on him and eventually overtook him on the second last lap to take the win and the overall championship. Faith held on for second and Kirk Gibbs was third.

Faith finished second overall in the championship two points ahead of Luke Styke in third.

“It’s great to get the win. I want to give a big thanks to the JDR team. They took the championship away from me last year, but I signed with them at the start of this year and have now managed to win the motocross and supercross. We are one big happy family and we have got the number one plate so now let’s go to America and do it over there,” said Moss.

Geran Stapleton won the Under 19s final ahead of Jarrad Davis and Sam Martin, but it was Errol Willis who continued with this year’s double championship trend by winning his second Under 19’s of the year with Stapleton second and Corey Lucas third overall.

Hayden Mellross had a dominant win in the Michelin Development Series final with Kurt Waterman second and Billy Jackson third. The third place finish was just enough for Jackson to take out the championship by one point over Mellross and Waterman finished third.