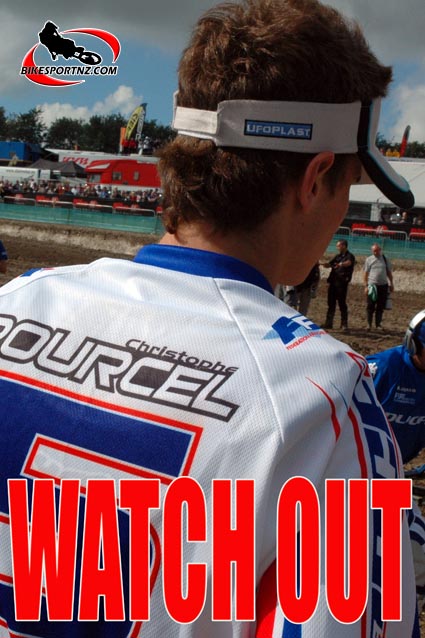 The MotoConcepts Racing team will be one of the hottest contenders likely to win the open class motocross (MX1) title in the United States this season.

The team has named flamboyant Frenchman Christophe Pourcel as its main rider to contest the open class, racing a Yamaha YZ450F.

Pourcel is coming back from a shoulder injury sustained at the final race of the season last year and underwent surgery and extensive physical rehabilitation to make a complete recovery. The extended time off has greatly benefitted the 22-year-old former MX2 world champion and is allowing him to come into the motocross season in top condition and feeling well prepared.

“The end of the season last year was disappointing but I’m very excited to make a brand new start in the motocross season with a new team, a new motorcycle and some good people behind me. It’s going to be interesting to see what we can accomplish together,” said Pourcel.

BikesportNZ.com was fortunate enough to chat with Pourcel at the Motocross of Nations in England in 2006 and again at the Irish GP in 2007, on the same weekend that he crashed spectacularly and prematurely ended his season.

Pourcel grew up in a motocross family in France and began riding at the age of five. He went on to become an accomplished amateur racer and turned professional at the age of 15.

In 2006, Pourcel became the third youngest FIM Motocross World Champion in history at 18 years of age by winning the 250 World Championship. His debut in AMA 250 Supercross racing in 2007 resulted in a second place finish in his first race and a win in his second race in Phoenix before returning to Europe for another year of FIM MXGP competition.

After suffering a catastrophic injury in August of 2007 during his 250 World Championship title defence, he was forced to miss the 2008 season. He returned to competition in 2009 in the AMA 250 East class and won his first race back and went on to claim the AMA Supercross 250 East Championship and successfully defended that title in 2010.

The American outdoor motocross season kicks off at Hangtown, Sacramento, California on May 21.