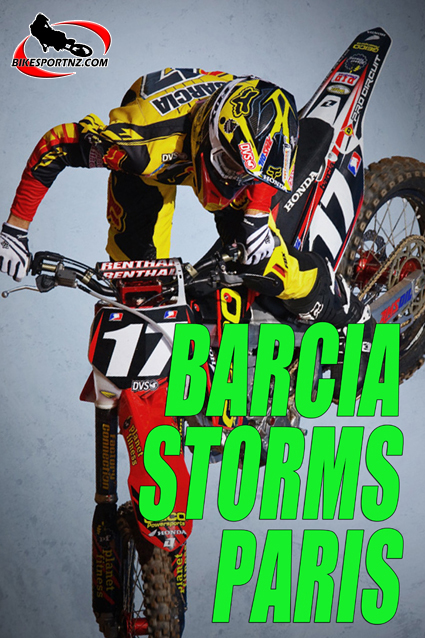 Winner of the last race in the Paris Bercy Supercross event, American rider Justin Barcia became the 28th ‘King of Bercy’ at the weekend.

One of the youngest ever winners of the event, the 18-year-old confirmed that he is surely one the most promising riders to emerge from the US in recent years.

Fellow American Kyle Chisholm was runner-up at the big annual supercross event in Paris, followed by Cédric Soubeyras who also led the French to the team win.

After his win on Friday and his disappointment on Saturday, when a bad start and several race incidents pushed him out of the podium, Barcia was tight in the standings before the third and final night. Runner-up in the super pole behind Gregory Aranda, he had some troubles during the American race; a bad start and later a race incident pushed him out of the top four riders, so he just got the sixth position on the main event grid.

A perfect start was the key of his final win, and when he got the holeshot Barcia knew what he could expect from this last race.

“I knew that the start here in Bercy is very important, and I was focused for that. I’m proud to be the new King of Bercy, I know who won this event in the past and it’s great to be there. The atmosphere was incredible, and I enjoyed this European trip,” he said after the podium celebration.

He beat Chisholm on Sunday and for the title; with the advices of his new team manager David Vuillemin, the most successful rider in Bercy’s history, Kyle improved his speed each night and got one podium each night.

Very fast on Saturday, the French riders were not as successful on Sunday even if Cyrille Coulon – winner of the SX Tour program – got a podium in the main event while Soubeyras finished third overall.

Soubeyras – riding a 250 two-stroke KTM – confirmed his win in Milano with this podium, while Aranda, who had the worst start on Sunday night in the main event ended in fourth overall thanks to his win on Saturday. Gautier Paulin suffering from his heavy crash on Friday got the seventh spot behind MX1 would champion Antonio Cairoli – who improved his results each night and nearly got a podium today, when he battled with Coulon during the last four laps – and Arnaud Tonus. Marvin Musquin didn’t enter this third day of racing, due to his knee injury sustained on Saturday.

France won the team’s classification for the second time since 2002, thanks to the good results of Soubeyras, Coulon and Aranda offered to the team; with the first two positions, team USA just missed a strong third result to get also this trophy.