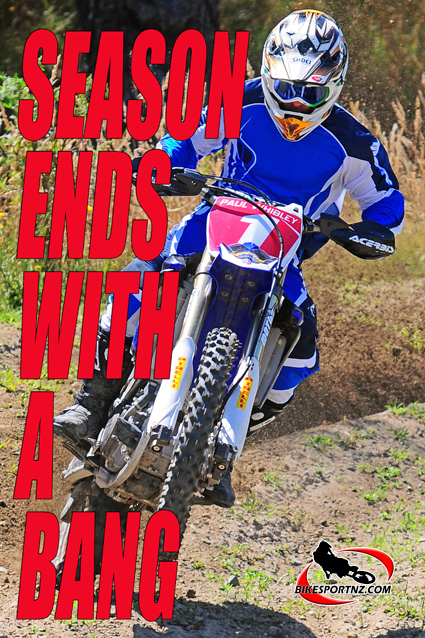 It may be a couple of steps down from the No.1 position he achieved last season, but New Zealand’s Paul Whibley still finished the 2010 season ranked among the world’s elite off-road motorcycle racers.

The Yamaha ace from Pahiatua ended his 2010 campaign in style at the weekend, winning the 13th and final round of the Grand National Cross-Country Championships (GNCC) in the United States, making it a Yamaha 1-2 in the process as team-mate Thad Duvall followed him across the line at the Indiana event.

However, as convincing as his win was at Crawfordsville, Indiana, Whibley will have to relinquish his grip on the No.1 number board for 2011 as his arch rival, Australian Josh Strang (Suzuki), had already done enough to clinch the 2010 championship.

The weekend’s win, witnessed by more than 10,500 spectators, was Whibley’s second in a row but it was too little too late and could not undo the damage done earlier in the season when bad luck cost him valuable points.

“This was a really good way to finish off the year and it is good momentum for next season,” said Whibley. “It will give me confidence and good motivation over the break.”

Due to the extreme drought that Indiana has experienced over the summer, dust played a factor in this year’s race, as a few top riders, including Strang, suffered problems due to clogged air filters.

Though third overall in the championship is a creditable result for Whibley, it is not what he wanted for 2010. However, his season was still a very bright one with the Kiwi hero riding away to his third consecutive title in the parallel Off-Road Motorcycling and ATV (OMA) series when he won the final round of that series in Illinois a week ago.