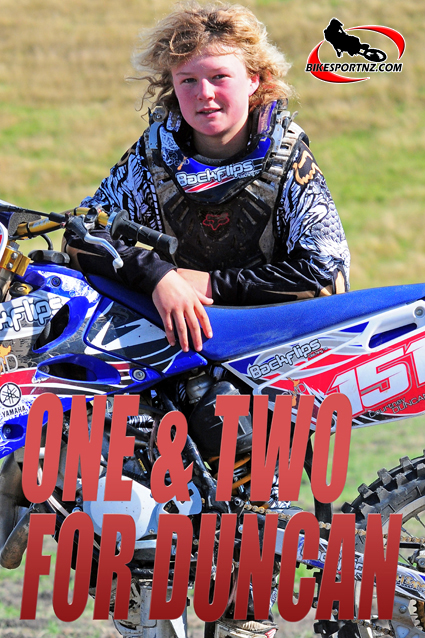 New Zealand’s Courtney Duncan has just returned from another successful hit and run raid across the Tasman.

The 14-year-old Yamaha star from Palmerston, Otago, tackled the Australian Junior Motocross Championships at Lake Macquarie last week and returned to her South Island home with a huge silver trophy tucked away in her luggage.

Despite winning all her races, Duncan appeared to have her work cut out in the fifth and final race of the championship after a crash in the first lap dropped her to last place.

But she powered on and, within two laps, had re-claimed the lead and then proceeded to lap other riders before taking the flag. Duncan made it a clean-sweep, earning her the 85cc championship title while her main rival, Aitken, ended in second place, 17 points behind, with New South Wales rider Jones another six points further back in third place.

In addition to winning this class, Duncan also backed up by finishing a strong runner-up against the 12-14 years’ 85cc boys, ending the championship just three points behind Wayde Carter.

Duncan recorded 3-8-1 results in this class.

“I could have won both classes but I had problems in my second race against the boys,” said Duncan.

“I was leading the race but came into a rocky section and the bike spun out and I dropped it. That put me back in 10th place. I fought back through the pack and got back up to third when I got blocked by another rider, we tangled and I went down again. I finished eighth.

“I’m happy with how I went but obviously disappointed too that I didn’t win both classes.”