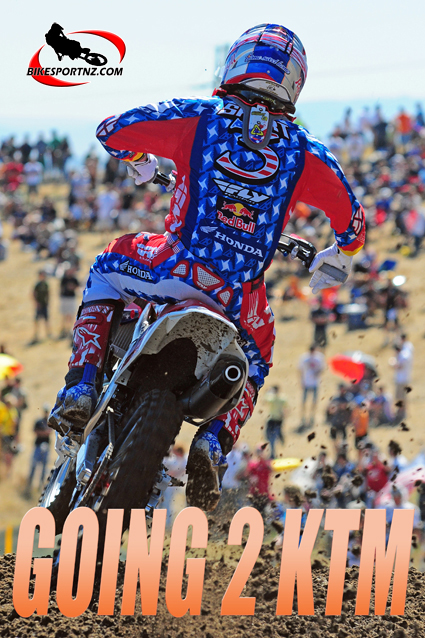 Short has signed with KTM for the upcoming AMA supercross and motocross seasons. Short will campaign alongside team-mate Mike Alessi aboard the KTM 350 SX-F. Team Manager Roger DeCoster will oversee the factory KTM effort.

DeCoster, who is also new to KTM this season after leaving his long-term association with the factory Suzuki team, worked with Short recently at the Motocross of Nations in Thunder Valley, Colorado. Alongside MX champ Ryan Dungey and Trey Canard, Short helped the US to its sixth consecutive MXoN victory.

“I have known Andrew for many years and of course we had closer contact this year when preparing and racing for the MXoN,” said DeCoster in the official KTM PR announcement. “I am looking forward to working with him and the other KTM riders as we begin testing and preparing for the coming season. We now have a strong team and one with real potential.”

Short grabbed a huge holeshot and led the entire qualifying race in the MX3 (open) class, finishing the race just ahead of New Zealand’s Ben Townley.

Short has been a remarkably consistent performer in his four years in the premier class in the US. In the outdoor nationals, Short has not finished lower than third in the overall points, having placed third overall in 2010. In Supercross, Short has twice finished third in the overall points (2008, 2009). A leg injury early in the 2010 SX campaign limited Short’s results to 12th overall.

In addition to Short and Alessi, KTM will also support two of its World Motocross stars in stateside series. MX2 champ Marvin Musquin will compete in the US both supercross and the outdoor nationals. A second rider, German competitor Ken Roczen, will campaign in the supercross series only, returning to Europe and the World MX series. Roczen, who scored a podium at MXoN in the MX2 race, moves from Suzuki to KTM for 2011.