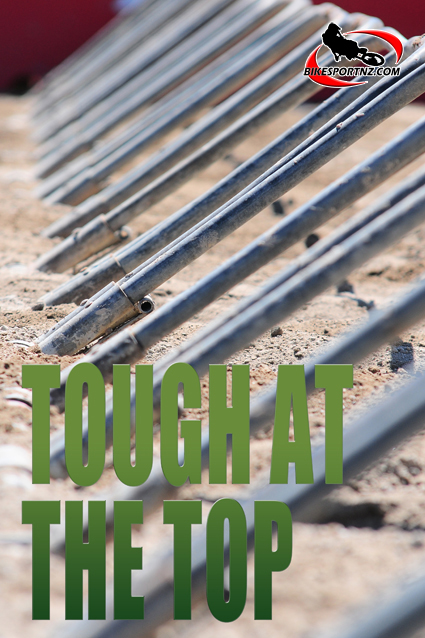 It was a mixed weekend for the Kiwi riders contesting this year’s FIM World Junior Motocross Championships in France.

Mangakino’s Kayne Lamont (Suzuki) DNFed his first 125cc moto but scrambled back to record an 11th placing in the second moto, giving him 17th overall for the event.

Rangiora’s Isaiah McGoldrick (KTM) fared less well, finishing out of the points both times, while his younger brother, Micah (KTM), managed to finish 32nd overall in the 85cc class.

“The last two weeks have been full on, been learning heaps about racing and the level that people race at is something different,” said Micah McGoldrick at the end of this European adventure.

“France was very hot and there was over a 100 riders in my class. I had my starts down all weekend, being top three round the first corner in both moto one and two. Good starts helped a lot for having a good race but my good starts and races would end all wrong.

“I was sitting in the top five in moto 1 and 2, and feeling strong and good on the bike but making too many mistakes, which cost me a good finish. That’s racing for you: Thinking you’re going to do well and it all goes bad and you’re just gutted it did. But I’m going to move on and come back stronger and faster.

“My goal at this event was to Qualify into the top 40 and I  qualified 23rd, so I was happy with that,” said Isaiah McGoldrick.

“On race day, things went backwards though. In moto one, I had a very hard crash around the high-speed sweeping first corner. Luckily I could still ride the bike. I made some positions up, until I then landed on a crashed rider’s bike that was on top of a blind rise … with no yellow flags. In this crash my front tyre went flat. I went into the pits and put on a new front wheel, then went back onto the track.

“But I got black flagged for re entering the track after being back in the pits. So that was a DNF.

“In the halfway point of moto two I was sitting 26th. I had another massive crash, going over the bars on a table top. I got back up but pulled out of the race because I was really shaken up from the crashes. It was a super painful and sour weekend.

“But enough of the negative. I am still alive and going strong.  For sure the last two weeks have been up and down, but, overall I had a awesome experience. I wish I could stay because this is where the best riders and biggest races are. I will be back as soon as possible.

“Thanks to all the people who supported us and our fundraising. I’m super lucky to have gotten here.

“And a special thanks to the ‘Machine’, Antony Sproull. He has sacrificed and done a lot to get us over here. He never doubts us. Thanks for everything coach.”

So, instead of the Kiwi trio, the weekend instead belonged to American rider Jake Pinhancos (65cc), Henry Jacobi, from Germany (85cc), and French sensation Jordi Tixier (125cc).

Youth riders from 34 different nations put on a scintillating display in six exhilarating races at the Dardon-Gueugnon circuit in France.

Not even the threat of thunderstorms and some very nasty winds kept away the 5000 spectators from watching these talented youngsters fighting for their dream of becoming the future Roczens, Herlings and Tomacs of the world motocross scene. 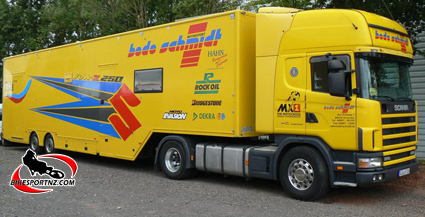 The 65cc class was won by Jake Pinhancos making his way to victory after an exciting battle with Saturday’s qualifying session fastest junior, Taiwanese Brian Hsu. The American showed he was the rider to beat right from the start putting up two moto wins: “It was really difficult to hold Brian but he had some bad luck on the last moto and that can happen to anybody. The track was really rough; I don’t have such hard-pack tracks at home so I had a hard time getting around it. I’d like to thank the people who set up this race, I want to come back sometime” said Pinhancos. Third place rider was Wilson Todd from Australia with two consistent outings in third and fourth.

German rider Henry Jacobi won the 85cc class with a victory on the first moto and a third place on the second. Slovenian Tim Gajser, winner of the second moto finished two points short, right behind Jacobi who put up a solid ride in his first race of the day.

On the second one the young German had some work to do: “I was in eighth after the start and had to make my way through the field only able to finish in third but was enough to get the overall. I want to thank my parents and my sister for helping me so much to get here”, said Jacobi. Fellow countryman Stefan Ekerold was third overall even with a bad start on the second moto which he finished in twelfth position.

Jordi Tixier won the European 125 Championship and can now add to his trophies the Junior 125 World Champion title. Although he had great opposition from American Joey Savatgy and Austrian Pascal Rauchenecker, the French sensation ran both motos with the level of competence the fans were waiting for: “Things weren’t easy as it looked because Savatgy is a pretty good rider although after having two good starts and finding better lines on the second race I managed to win both motos.  I hope to ride on the MX2 Championship next year and get some good results to be able to thank again the support I’ve been having from my family and fans”, said Tixier.

USA got on the top step for the nations classification. France was second and 2009 winner Australia had to settle for third position this year.