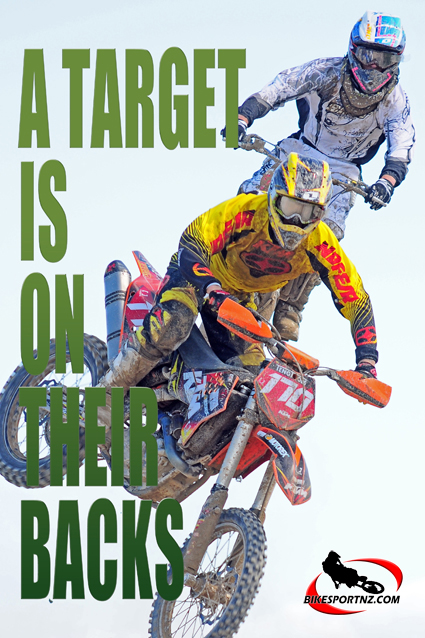 A target is on the backs of experienced off-road pairing Jason Davis and Shaun Fogarty.

These are the men everyone will be out to beat at the second race of the Spectrum Motorcycles sponsored Woodhill Two-Man cross country series this Sunday.

Davis and Fogarty teamed to win race one last month and they will again be the obvious favourites to win this time around as well.

Eyes will also be on round one’s ironman category winner, Karl Power, and to a slightly lesser extent Mike Skinner, as these riders fought through from a middle-of-the-field start to claim 2nd and 3rd place outright behind Davis and Fogarty. The plan for round two is to start the Ironman riders straight after the Experts, so expect to see even closer racing from the top riders.

Another noteworthy effort was by Orewa College 14-year-olds Aiden Kiff and Logan Beuth who earlier this year had teamed up with BikesportNZ-sponsored rider Joshua Jack to win the Schools MX Championship at Ardmore.

Expect to see an appearance from team-mate Joshua Jack, fresh from his second place behind Rory Mead at the Dead Toad 3-hour at round two this Sunday.

In the Ladies/Junior race it was all girl power as the Greenslade girls, Julie and Kate, came to the fore over the rest. A great effort by Julie whom not only raced the Ironman women’s race but teamed up with partner Gary Almond in the afternoon to win the Mixed section outright.

Jake “The Snake” Wightman (Waimauku) and Troy Taylor (Whangarei) will again be hard to beat in the Junior Two-Man. These two, racing in the 10-11 age group came home 5th overall in the 50-rider field and the smart money says they will emulate this achievement again.

Race Two is this Sunday, August 29, and a totally new course has been made that will be as open as you can get in Woodhill Forest with some farm land included to encourage the first time racer.

The race venue has changed from that previously advertised and is in the same location as Round one, Rimmers Rd, past The Kawasaki Sandpit.

IMPORTANT NOTICE: Sign-on will be closing at 8.30am for the juniors and 11.30am for the seniors. This will be strictly enforced so get there early to avoid disappointment.