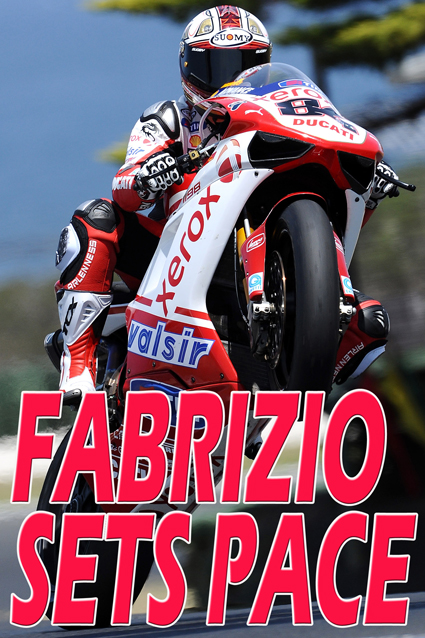 Fabrizio (Ducati) will go to the opening round of the World Superbike Championship at Phillip Island this weekend feeling confident after holding on to the top spot at the end of pre-season testing in Australia.

The Italian’s best lap during session three of four, a time of 1min 31.650secs, was enough to keep him perched at the top of the score sheet right up until the final chequered flag of the winter period fell.

The concluding session itself was topped by Jakub Smrz, the Czech rider revealing the amalgamated Borciani & Guandalini team will continue to be a force as a single entity as he fell just three hundredths short of overhauling Fabrizio (pictured above).

In the end, Smrz would be classified third overall, marginally behind Shane Byrne in second, while Carlos Checa made it a Ducati 1-2-3-4 as he held on to fourth by virtue of his quickest time on day one of the test.

Despite being unable to break the 1min 32secs marker, an improved time of 1min 32.175secs during the final session moved Jonathan Rea up to fifth to be the highest classified non-Ducati rider, marginally ahead of the second Xerox machine of Noriyuki Haga.

Ruben Xaus made big gains between the sessions to slice almost a second off his best time and lift himself up to a respectable 11th position overall, the Spaniard putting his BMW ahead of both Yamahas and Kawasakis, as well as team-mate Troy Corser.

Indeed, it was a disappointing end to the weekend for both James Toseland and Cal Crutchlow on the Yamaha R1, the pair focusing on set-up but finding themselves on the wrong end of a tight mid-field in 12th and 17th respectively.

Chris Vermeulen led the Kawasaki charge in 16th, with Tom Sykes following in 18th, while Andrew Pitt was a solid 19th for the new Reitwagen BMW team, the Australian no doubt buoyed to be quicker than Corser during the final session.

Joshua Brookes rounded out the top twenty, the Echo CRS Honda rider hampered by missing one of the four sessions, while Roland Resch, Matteo Baiocco, Vittorio Iannuzzo and Roger Lee Hayden followed to complete the field.

With testing over with, attention now turns to the opening round of the 2010 season around the Australian circuit, with action getting underway this weekend.

OVERALL TIMES from testing this week: