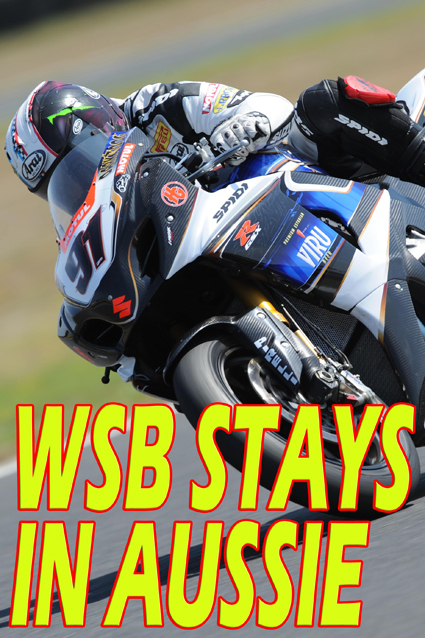 Australia will continue to host a round of the World Superbike Championships (WSB) until at least 2014.

The announcement came this week at a press conference to kick off this weekend’s season opener.

The conference was held in Melbourne at the Eureka Skydeck with the Victorian Minister for Tourism and Major Events, Tim Holding, Infront Motor Sport’s CEO Paolo Flammini, Phillip Island circuit’s Managing Director Fergus Cameron and six of the top superbike riders in attendance.

Holding announced the extension of the contract for the Australian round of the Superbike World Championship, with the agreement also making Phillip Island the official pre-season test venue for the next two years.

“This is great news for Victoria, given the increased worldwide media interest afforded to the hosts of the first round,” Holding said in a release issued by Infront Sports.

“Hosting the official testing will see all teams arrive at Phillip Island a week early providing a further boost to the local economy. The Superbike World Championship delivers around $A15 million in economic benefits to the Victorian economy, attracts almost 10,000 interstate and overseas visitors, and provides Victorians with an opportunity to see world class motorsport in their own backyard.”

Flammini was also pleased that the deal was done.

“It gives me and everyone at Infront Motor Sports great pleasure to confirm that, with the support of the Government of Victoria, the contract with the Phillip Island circuit has been extended until 2014, with an option for further extensions,” he said.

“I would also like to thank the circuit organisers and everyone who contributes to this great show for their partnership and boundless enthusiasm.

“The FIM Superbike World Championship is growing in importance every year, with the participation of no less than seven manufacturers, and the Phillip Island round is definitely one of the most popular on the calendar, a real favorite for the spectators, teams and riders. Although Australia is a long way from the main part of our season in Europe, I can assure everyone that this round is absolutely at the centre of our thoughts and plans for each and every season.”

After the announcement, Australians Troy Corser and Chris Vermeulen, Brits James Toseland, Jonathan Rea and Leon Haslam (pictured above) and Noriyuki Haga talked about their recent tests at Phllip Island and posed for photos.