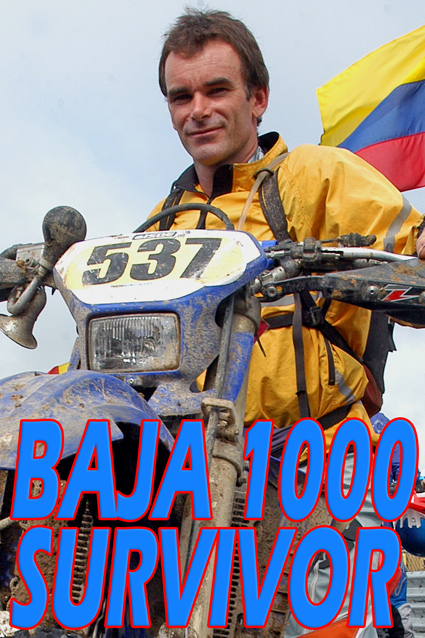 “What a race. Completely nuts. Bikes started at 6:30am, I got off the line close to 7.30am, being at the back of the pack in sportsman class.”

This is the news just in from former Hawke’s Bay enduro rider Trent Burgess as he reports on his assault on the famous Baja 1000.

Though he now calls Canada his home, we were thrilled to get this report in from a true Kiwi on the international bike scene.

Here’s what Trent had to tell us about the event …

“The ride out of town was super dusty (as was most of the course) and not the place to be putting on a serious push.  One previous solo-ers advice was that the race can’t be won in the first 80 miles but it sure can be lost. I followed that advice,” said Burgess.

“Eased my way past as many slow riders as possible in the first 80 miles.

Dale Douglas was doing all my chase work, and we did a filter straight away at 80, then got on it. Seemed the terrain opened up and traffic lightened up at that point so it was all guns blazing.  Caught up to quads at 100mile. Quads suck.  Dust, erratic, slow in the wrong places, and pin it as soon as it opens up – difficult passing.

“Went down for the first time trying to put a pass on one, got silt dusted at the critical moment and went down not too hard, did sprain my left thumb – still a bit bruised and swollen – so backed off and put the move on in technical terrain over the mountain pass. Caught another quad in the river bed at the bottom of the pass, same deal, no passing and as soon as it opened up dusted the shit outta me.

“Backed off and had to wait about 20 miles for good open terrain, passing lots of bikes though.  Once clear of quads in the ‘all lines legal’ sections where you can go wide in the desert, the big push started.  Had one more crash at about 185mile when a bike I was putting a pass on in the whoops swapped out and crossed in front of me, together shoulder to shoulder flying sideways at about 30mph.  The result was predictable, but everybody unscathed.

“Met Dale at 200mile for next pit at 12:30pm, so running a 40mph average – good speed.  Did filter again, got food on board check bike over and into the southern loop.  The main pit area just after there was awesome, it’s the middle of the ‘8’ of the loop so big setups all over.

“Going through the pits at 80mph with people jumping out of the way, trying to catch your number to see where their guys should be, is AWESOME.  The Mexicans were just starting to get drunk so not too many shenanigans yet.

“The southern loop worked well for me, the lake-bed Laguna Diablo was a 95mph section for me, didn’t feel right to hold it at 100!  Then onto zoo road 80mph sandy surface, sit on the back wheel and keep suggesting the direction to the front – wicked. Then into a section of mixed whoops for 25miles, and deep sand river bed for another 25.

“Once out of there its turn north and run a hard rocky section and some fast running mixed, then into the big WHOOPS proper, capitals for respect.  Still passing lots of bikes at this point!  The next section is 60miles of straight whoops, and it took a lot out of me.

“A fine balance between speed and energy exertion, but the light was beginning to fade and it is worth getting many miles done while you can still see.  Met Dale at 375mile for my night pit, right at 5pm when night arrived with a clang.  Did a back wheel as half the knobs were gone off the Maxxis Desert IT (don’t try it), put the 8” light up front, lights on head, food in stomach, new shirt/gloves/goggles etc and ready to go.

“About a 20min. pit but necessary, Dale rocked it for me.  Still running the 40mph average up to this point…

“The next section goes back through the centre of the 8, night time now and LOTS of drunk people. An otherworldly experience, lots of smoke/moisture/dust in the air made visibility medium poor, looked like Armageddon out there, people blowing up bombs as you pass, tires rolled out, people running everywhere drunk outta their minds – a HUGE pit area, what a trip.  Was running up in the top 20 by now and still going reasonably strong.

“At 420mile we turn into the mountains, and it had been warm up till here, but the temperature plummeted and the road opened up so I was 80mph running wearing only my riding shirt, not wanting to stop as my gas pit was 10 miles away.  Might have been a mistake as by time I arrived I was frozen and starting to feel the real fatigue, and a long technical section just ahead.

“Food was becoming an issue by now, and the gas pit guys weren’t doing a very good job helping me out.  Not even a banana in some of them.  Into the technical stuff, and the pace dropped considerably but still riding ok.

“Apparently this section provided a lot of carnage for people behind me, some wrecks for sure.  The first truck caught me at 7:45.  the rule is just get out of the way, and slow down as dust is now a huge issue clinging to moisture in the air, making vision difficult. 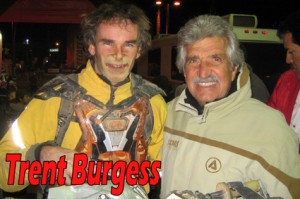 “The next trucks got me at 8:45 and the second one almost took me out despite me giving him lots of room, literally brushing me with his back end in a full power slide still coming across my side of the road, probably my closest call of the race as from then on I was on a ‘get off the road’ program with them.

“Rolled into 500mile and met Dale for the last time around 9pm.  Just starting to get loopy at this point, and not taking care of myself.  Dale didn’t really pick up on it, so away I went mentally spiralling in.  Met Rick Tennant (Baja friend from Oregon) and Terry (team 501) at 530mile, no real recollection of that section.  They lifted my spirits a bit and that carried me for another 20 miles, but the pace was really dropping off.  Being passed by a few people now, but not too many as everybody was riding slow in the challenging visual conditions.

“Again not too much recollection of this section.  On to the highway for a few miles, cold, missed the turn (no idea how…) off the highway so a 15 minute side trip ensued.  Backtracked and got on course, then into the last kick in the pants section.  This 40mile section is rough, silty, badly silt rutted from the trucks, and draining.  Freezing also for good measure.  Average speed dropped to about 20mph, crawling along.  Absolutely no style left, survival run knowing that at about 640 it opens up again and we run back into town.   640 was a relief for sure as the riding got easier, and the end is mentally in sight.

“The last 30 miles is a minefield of booby traps, tires, wire, broken glass, and missing arrows.  Got lost at least once in a housing tract, pointed in the right direction by some ancient guy running out of his house in his house coat and slippers at 4am(wanted me out of the neighbourhood  so he could keep sleeping no doubt).

“Final run down the roads and into the canal back to town was a huge feeling of relief, and back to the start/finish line.  Great reception there.

Nice celebrity status, word got around that I was third solo finisher (haven’t actually seen official results to confirm this yet…) so good hype.  Dale was a bit of a worried mother at this point as it had taken me 7 ½ hrs to run the last 160miles from when he had last seen me, so off to eat/shower and get to bed.

“Woke up in reasonable shape yesterday, still a bit out of it wandering around but the recovery is good today.  Still plenty stiff, but all parts moving.

“So all in all, a WICKED and AWESOME experience.  Met lots of great people, and surprised even myself with a third place finish.  Certainly beat a lot of teams in, was officially 64th overall of 350-ish starters, not sure of my place in bike only.”