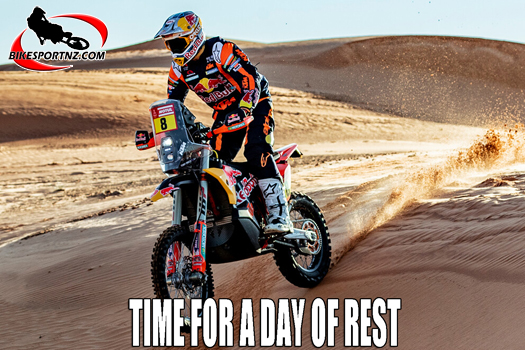 With more than 1000 people lining up to race nearly 7500 kilometres across Saudi Arabian deserts, the 2023 Dakar Rally is proving to be another epic rally-raid adventure.

A rest day now at the halfway stage is probably just what the doctor ordered.

Riyadh was the place for this year’s pause to racing, with the bivouac placed in the surroundings of the Saudi Arabia capital. So, for the first time in a long time, riders could sleep in a nice hotel, relax and meet fans eager to feel the vibes of the most important off-road marathon in the world.

For the technical support team – mechanicals and engineers – it was probably the longest journey so far. Working all night, they had to revise and check every component and detail of the Honda CRF 450 Rally.

At the end of the day a final road test confirmed that the all process was a success, meaning the riders will have their bikes in perfect conditions when they start their engines again.

This 45th edition of the Dakar Rally is already seen as one of the most competitive of the past years. After eight stages, all contenders are really close in the top standings – and this happens after more than 30 hours of special stages already completed!

The second week of the competition will now start with the ninth stage, making the connection between Riyadh and Haradh.

The special stage will have 359 kilometres plus a liaison of 328 km, starting with wadis and canyons. Going off the track and struggling with navigation are just two of the hazards of this special. In the end there will be a beautiful chain of dunes to overcome before reaching the bivouac.

Rider standings after 8 of 14 stages: